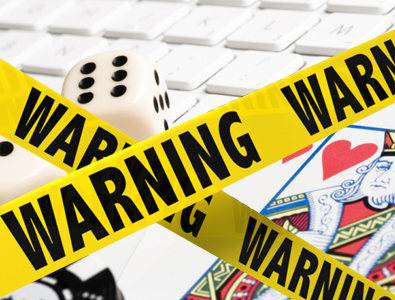 The Wizard and his team wish to warn our readers about the following casinos and software companies. However, the offenses do not rise to the level to warrant inclusion on our Blacklist.

VegasCasino.io has a serious warning against it as there’s no gaming license present, meaning that there’s no gaming license present, which is a major red flag. Seeing as how this is a Bitcoin powered casino, the lack of regulation means that player deposits could vanish in the event of a dispute and there’s nothing that could be done to retrieve them. Because of this we are graylisting VegasCasino.io and urge players to pick a licensed site to play at.

I first became aware of Spielo G2/Finsoft when a player questioned the fairness of their Reel Deal game in a thread at CasinoMeister. After suspicious results at the BetFred casino, the player uploaded a log file of his play. The vast majority of the play was on an even money bet with what should have been a 50% chance of winning. The help file on the game claimed a 100% theoretical return.

The player made this even money bet 19,196 times. He won 9,201 times and lost 9,995. The probability of luck this bad or worse is less than 1 in 200 million, or five standard deviations south of expectations. It should be noted another game called Hi Lo Gambler is also suspected of the same kind of biased even money game, but I have not personally analyzed log files of that one.

Later in the thread, post #204, Aaron with Betfred said that the game was developed by a online gaming software company called SPIELO G2. They evidently had a fair and what I would call a cheating version of the game, which was set to a return of 96%. The help file for the fair 100% version was incorrectly given to Betfred.

Where I live in Nevada, regulation 14.040 says that any electronic representation of a card game must be dealt fairly, where each card has an equal chance to be played. I applaud this regulation, and I would call doing otherwise cheating. Granted, the parties involved with this game operate outside Nevada, but I expect any card, dice, or keno game anywhere to play by the same odds as if dealt fairly by a human being.

According to Casino City online, 118 online casinos use their software. The SPIELO G2 web site indicates other entities using their products, including the Barona casino near San Diego.

After doing an investigation, Betfred removed all games by SPIELO G2. However, it is my understanding that they have not refunded past losses on the gaffed games, which is unfortunate.

Some may wonder what is the difference between Finsoft, Spielo G2, and another company called Realistic Games, often mentioned in this story. It is my understanding that Finsoft is a division of Spielo G2. Realistic Games provided their games to Finsoft to distribute. However, the games made directly by Realistic Games performed fairly. We know this because BetVictor got the games directly from Realistic Games and they were fair. Finsoft altered the code to make losing cards appear more often than statistically expected in a fair game.

Win A Day Much like Slotland (see below), the odds of hitting a jackpot is not naturally determined by the cards, even by their own admission.

Please note that all games share the same mechanism which determines the jackpot win. Thus, with card games, the probability of hitting the jackpot combination is not natural but controlled by this shared random mechanism in the same way as slot machines' wins.


This statement can be found in the FAQ, under "How are the odds created for your games?"

It would seem that card games are not the only ones affected by this manipulation of the odds. A complaint was raised with The Pogg about their roulette game. In short, a player bet on a single number in single-zero roulette 1156 times and never won. The probability of this is 1 in 57 trillion.

While the casino admitted that was a mistake, they gave disaffected players a bonus only, with a mandatory play through requirement, as compensation. In my opinion the player should at least be given a full unconditional refund, preferably more as a penance.

It seems that Slotland shares the same cheating jackpot mechanism as Winaday (see above). Here is what they have to say about their Jacks or Better game.

Please note that all Slotland games share the same mechanism which determines the jackpot win. Therefore, the probability of hitting the jackpot combination on JacksOrBetter is not natural but controlled by this shared random mechanism in the same way as slot machines' wins. — Jacks or Better rules.

Be the Dealer makes the blacklist for failure to honor affiliate royalties to bj21.com. I will let Al Rogers of bj21 state the problem in his own words:

BJ21.com had an advertising relationship with BeTheDealer.com. We were paid promptly and regularly. Suddenly the payments stopped. In 2008, after many emails back and forth, we agreed to waive about two-thirds of the past due balance, in exchange for small monthly payments. The payments on the agreed-upon $32,000 balance were to be $1,000 per month. Payments were made from April 2008 until June 2009. In June 2009, again the payments stopped, and nothing has been paid since. We are still owed $14,887 by BeTheDealer.com. Numerous emails and phone calls have resulted in nothing more than broken promises and stalls.

It appears that BeTheDealer.com is in poor financial condition, and cannot or does not intend to honor its obligations. Potential customers and advertisers should be warned to stay away.

I gave BeTheDealer a chance to state their own version. A BeTheDealer representive named Martin said that they agreed to resume payments, to avoid the threatened bad publicity by both Al and me. Before that deal was made, Al Rogers posted a warning at onlinecasinosuite.com. I'm not sure of the timeline, but Martin said the post was a violation of their understanding, and thus he never resumed the payments.

Enterbet is placed on the Grey List for stealing content from my site. Much of their games rules were copied word for word this site.

During the glory days of Internet casino bonus hunting, the Golden Palace offered a 20% bonus on purchases up to $10,000, every month. I personally collected $2000 in bonuses every month, and sometimes from their sister casino Casino Depot as well. In April 2000 they evidently started to realize what was going on and sent players letters stating that if they didn't play more during off promotions they would not be offered future promotions. This was fair and I gave them more free play. Others made deposits immediately after receiving this letter and played. Shortly after this they took an even stronger stance and locked out all players suspected of bonus abuse. By early June they had finished their investigations. Some players, including me, got their money back, and some did not. Golden Palace says those funds were donated to charity. I am of the opinion that every online casino should abide by its own rules. Seizing funds from players whose only fault is taking advantage of the bonuses that were offered is not acceptable. Not until the Golden Palace refunds the accounts of all players from this debacle will I remove them from the blacklist. For the long version of this story visit my Golden Palace statement. (Playtech software)

While the actions above are worthy of inclusion on the Blacklist, I upgraded them to this Gray List because the incident in question happened 15 years ago under different ownership.