Pai Gow Poker is a variation of the Chinese domino game pai gow. The game is known for a slow rate of play and lots of pushes, resulting in low risk game. While a game of skill, most hands are obvious how to play, and it is not difficult to learn proper strategy for the rest of them. Every player plays against the same dealer hand, which causes the table to often win and lose together, resulting in a fun and social game.

Pai Gow Poker was invented in 1985 by Sam Torosian, owner of the Bell card club in southern California. However, his is a name few people recognize. While other have made millions inventing casino games, Sam received some bad legal advice that card games were not patentable, and never filed one for his game. When his game was a success at his own casino there was nothing to prevent competing casinos from offering the game as well, and they didn't have to pay Sam a dime. 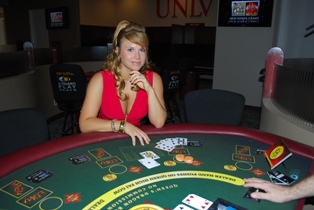 I'm very proud to present my pai gow strategy page. It contains simple, intermediate, and advanced strategies for both playing as the banker, against the banker, and combined. This page took months for my assistant JB to create so I hope you'll have a look.

For your convenience, I also have my one-page simple pai gow poker strategy (PDF).

The house advantage in Pai Gow Poker depends on partially on your skill setting hands but more on how much of the action you bank. I plan to publish some pai gow poker strategy in January, 2014. Until then, the following tables show the probability of each possible outcome and the expected value four ways — whether using the house way or optimal strategy and whether banking or the dealer is banking.

The following table summarizes the expected value under all four scenarios. The "difference" row and column show that banking, compare to not banking, increases expected value by 2.47%. The difference between following the house way and the theoretical optimal strategy, which I'm quite sure nobody knows, is 0.21%.

Often in Washington State the casino will not charge the 5% commission on banker wins. They make a profit on the banker's advantage and side bets only. With no commission, the banker has a 1.30% advantage, and all others playing against the banker a 1.30% disadvantage.

Sometimes, when a player invokes his right to bank, the other players will want a shot at whatever the side bet is, but dislike betting against another player on the primary wager. Another reason this might be done is to "change the luck" at the table. In this case, non-banking players may make a deal with the banking player that if one beats the other, the winner will refund the loser, less the 5% commission. It is essentially banking against yourself through a gentleman's agreement with the banker. The dealer will have nothing to do with it. In some casinos, they will overtly not allow it, although it may be hard to prevent, especially if the deal is made in a foreign language the dealer doesn't know. I mention this as a warning that you may be asked to do this, if you choose to bank. How you respond is up to you, but I will say it may cause some ill-will at the table if you say "no."

There is a discussion of this in my forum at Wizard of Vegas.

The house way is how the dealer arranges their own hand. It can vary from place to place the differences are marginal and happen infrequently. The house way is available for the following casinos:

The following table shows the probability of forming any specified poker hand. These probabilities consider all seven cards and without regard to how the player may play the hand.

German translation of this page.