Roulette is one of the easiest games to play and understand in the casino. As usual the easier a game is to understand the greater the house edge, and roulette is no exception. If you are looking for a easy to understand and slow paced table game, and are willing to sacrifice on the house edge, then you may like roulette. If you want something more stimulating or with a decent return I would suggest looking at other games.

One difference between roulette and all other table games is that roulette chips have no value denomination printed on them. This actually is the true definition of a chip, one which indicates its value is technically called a check. The roulette table comes with six to eight sets of different colored chips, each set consisting of 300 chips. When a player purchases chips he gets his own color and the value of each chip is the buy-in divided by the number of chips received. The dealer will place a token on top of the dealer's stack of that color of chips to indicate the value.

A U.S. roulette wheel consists of 38 numbered slots: numbers 1 to 36, a zero, and a double zero. The betting layout consists of every individual number as well as a host of "outside" bets on combinations of numbers. After the players make their bets, the dealer spins the wheel and a ball and after several seconds the ball will land in one of the numbered slots.

The following table displays the available bets, the win (on a "to one" basis), and the probability of winning under U.S. rules. All casinos in the U.S. follow these rules except for in Atlantic City. The house edge on all bets is 1/19, or 5.26%, except for the 0-00-1-2-3 combination, which carries a house edge of 7.89%.

What most call "European roulette" is roulette played on a 37-number wheel, with one zero only. The pays are the same as in American roulette. However, with one zero the house edge is cut to 1/37, or 2.70%, on all bets.

In Atlantic City, any all even money bets (red, black,odd, even, 1-18, 19-36) follow a variation of the European half-back rule (see below). If the ball lands in 0 or 00, then the player will lose only half of any even money bet. This lowers the house edge to 2.63% on these bets. This rule does not apply on single zero wheels.

French roulette is played on a single wheel and also features a favorable "en prison" or half-back rule. Under the "half-back" rule, if the player makes any even money bet (red, black, odd, even, 1-18, 19-36), and the ball lands in zero, then the player gets half the bet back, known as "la partage" in French.

The term French roulette is also somewhat of a misnomer because the "la partage" rule can sometimes be found in casinos outside of France, including some high-limit rooms in Las Vegas.

The following table shows the probability of a win, push, and loss under every imprisonment variation I'm aware of.

When given the choice to lose half or face imprisonment, the expected value is the same under French rules. Otherwise the expected loss is less losing half.

Triple-Zero Roulette is roulette played on a 39-number wheel. The wheel has the same numbers and colors as a double-zero wheel, plus a 39th place on the wheel. This 39th place will always be green and often the Logo of the casino where the game is located, for example an apple at the New York New York. The game premiered at the Venetian in Las Vegas in September, 2016.

Much like zero and double-zero, all even money bets lose if the ball lands in green. The order of the numbers 1 to 36 is the same as in single-zero roulette. The 0, 00, and Logo are all consecutive, with the Logo in the middle.

I've noticed some electronic roulette games don't pay the full 35 to 1 on single-numbers bets, and/or 17 to 1 on double-number bets. Invariably, any game that short pays the player like this is going to be on a double-zero wheel as well. The following two tables show the house edge on single- and double-number bets, according to the win, assuming a double-zero wheel, and based on "to one" odds. Be careful that on electronic games wins are often given on a "for one" basis, meaning the original wager is not returned on a win. To convert a "for one" odds to "to one" odds, subtract one.

Best Roulette in the West 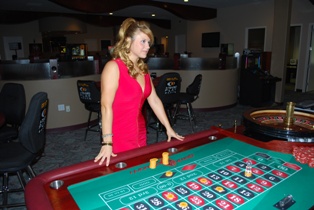 Best in Nevada: The Bellegio, Mandalay Bay, MGM Grand, Mirage, Rio, and Wynn all have European roulette, with a house edge of 1.35%. Usually such wheels are in the high-limit rooms, but the MGM and Mirage also have a European wheel in the main casino at a $25 minimum.

Best in California: It is my understanding that the only single-zero roulette in California is at the Barona casino, with a house edge of 2.70%.

I am proud to present my Las Vegas roulette survey at my companion site Wizard of Vegas.

To the casual observer, it would appear that the numbers on the wheel are not organized and seem to be distributed randomly. The only obvious patterns are that red and black numbers alternate and that usually two odd numbers alternate with two even numbers. However the distribution of numbers was carefully arranged so that the sum of the numbers for any given section of the wheel would be roughly equal to any other section of equal size. Most numbers are part of a pair, with one number between them. These pairs add to either 37 or 39.

For what it is worth, the sum of all the numbers in roulette is 666.

Some people and books claim that roulette wheels are biased, with a heavy side and a light side. Gravity causes the numbers in the heavy side to hit more often. This, I believe, used to be true when the quality of the equipment was poor. However, modern roulette wheels are much better and very rigorously tested. Only in a casino using a very dated wheel, may you be able to find a biased one by testing many thousands of spins. Based on stories I have heard, your odds of finding such wheels are probably best in Europe.

Ugh. If you think you can beat roulette with a betting system please read my section debunking betting systems. If you don't believe what I say there, here is what the Encyclopedia Britannica says under the subject of roulette:

The oldest and most common betting system is the Martingale or "doubling-up" system,in which bets are doubled progressively. This probably dates back to the invention of the Roulette wheel, but every day of the week some gambler somewhere reinvents it, or some variation of it, and believes he has something new. Over the years hundreds of "sure-fire" winning systems have been dreamed up, but regardless of what system is used, in the long run it cannot overcome the house's advantage of the 0, or 0 and 00. This house advantage is the only system that consistently wins in the long run.

"No one can possibly win at roulette unless he steals money from the table while the croupier isn't looking." — Albert Einstein

The California Constitution prohibits a ball and wheel alone to determine the outcome in roulette. In the greater San Diego area the casinos have thought of some creative ways to offer roulette anyway. Visit my page onSan Diego County roulette to see how they do it, and who offers the best odds.

I get asked a lot about whether I believe dealers can influence the spin to a certain area of the wheel. I used to be very skeptical of it. However, after considering the articles How to Win at Roulette — Part I and Part II by Arnold Snyder as well as other evidence, I think it would be easy for a colluding dealer could do a late slow spin to benefit a wheel clocking player. An extremely skillful dealer may even be able to influence the ball to a certain sector of the wheel. So, for now, I'm still straddling the fence on this one (ow!).

In March 2017, I concluded an analysis of an electronic roulette game by Interblock for ball steering away from perceived wheel clockers. For more information please see my page on the Organic Roulette Experiment.

Play roulette for free with this Flash game. I finally found a Flash game for my site which downloads quickly.