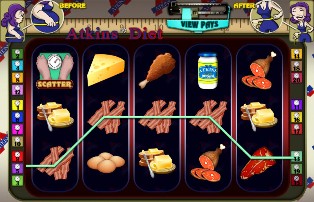 I designed the Atkins Diet slot machine in 2008 for a speaking engagement at a conference on slot machines in Sydney, Australia. It was used as an example of how video slots, sometimes known as pokies, are designed. I'll start with presenting the pay table and reel strips, and then I'll show the probability and return of the various ways to win.

The next table shows the Atkins Diet pay table. All wins must be left aligned. The Atkins symbol is wild and can substitute for any symbol except the scale.

The following are the reel strips for Atkins Diet. 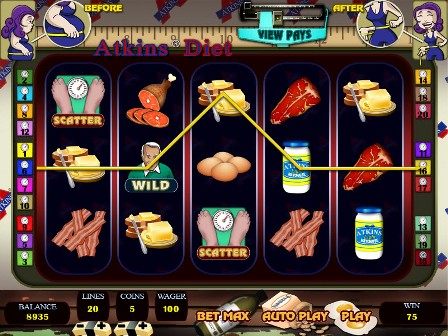 Random numbers of 27, 14, 3, 31 and 27, for reels 1 to 5 respectively, would have resulted in the example above. The following table shows the position on the reel strips where all 15 visible symbols fall on the screen.

The first step to calculating the return of a video slot is to count how often each symbol appears on each reel. The following table answers that question.

The next table shows the contribution to the return for each possible win. Each cell is the product of the probability, from the table above, and the pay table. The right cell shows a total return from line pays of 63.46%.

The scale serves as a scatter pay symbol. The player gets credit for a scatter pay if it appears anywhere on the screen. Unlike line pays, scatters don't need to be left aligned or on an active pay line. To be fair, scatter pay wins are based on the total amount bet. The following table shows the number of scatters per reel, total symbols per reel, and the probability of a scatter on that reel, which is 3×(column 2)/(column 3). The reason for multiplying by 3 is there are three visible positions on each reel.

The next table shows the probability and contribution to the return for 0 to 5 total scatter symbols. The lower right cell shows that the scatter pay feature returns 6.98% to the return of the game.

The player earns the bonus if he gets at least three scattered scales. The sum of the probability of 3 to 5 scales in the table above is 0.011185. During the bonus, the player will get ten free spins, and all wins are tripled.

The following table summarizes the three ways to win in the game. The bottom right cell shows an expected return of 97.046%. In other words, for every dollar the player bets, he can expect to get back 97¢.