In my continued efforts to show the world how video slot machines work, I set out to deconstruct how Hexbreaker was designed by playing it. Armed with a cell phone camera, I recorded about 45 minutes of play. With information about the symbol frequency, pay table, and bonus rules only, it is possible to analyze the odds of any slot machine. This is what I endeavored to do with Hexbreaker. 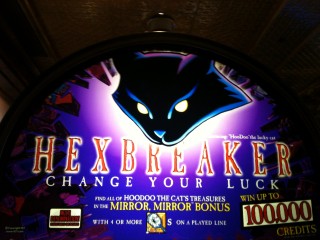 Much like a game I previously deconstructed, Jackpot Party, I chose Hexbreaker because it didn't involve bonus spins and the bonus rules were fully disclosed. The only mystery was the reel stripping. So I found a game in a quiet corner of the Main Street Station in downtown Las Vegas and recorded 45 minutes of play. These videos can be found on YouTube:

When I returned home, I hired my brother in law to record, by hand, the three visible symbols on each reel for all 506 spins in the first and second videos. This took many hours, at my financial expense.

Then I tried to put together the order of the reel strips based on the observed sequences of symbols. To make the reels balance and loop around I assumed that some sequences appeared twice on the same reel strip. These were chosen according to what completed the reels and which sequences occurred more frequently. My webmaster JB then wrote a program to assemble the combinations in order. It should be noted that given the sequences observed, multiple solutions are possible. The reel strips below are just one possibility. However, all of them would have the same expected return.

As stated above, I am not claiming these are the exact reel strips in Hexbreaker. However, the symbol frequency I believe is very close to the actual game at the Main Street Station. The following table shows my best guess as to what the Hexbreaker reels look like.

The way multi-line video slots work is they draw random numbers, one for each reel, to determine where on the reel strips to stop. In this case, the game would choose five random integers, one for each reel. The random number should be from 1 to 69 for reels 1 and 5, and 1 to 67 for reels 2 to 4. Suppose, for example, the game chose the numbers 55,41,24,29,11 for reels 1 to 5 respectively. Then assume the game maps these number to the top row seen on the screen. In this example, the screen would look like this: 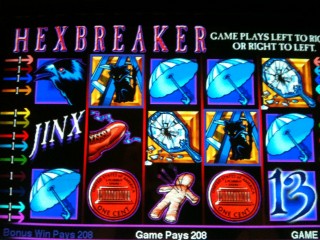 The next table shows the total number of each symbol on each reel. Again, this is according to my best estimate.

The pay table is easily seen from the rule screens, which appears in the table below. The Logo is wild and may substitute for any line pay combination. The cat symbol is unique because if the player achieves at least three cats with no wilds, then it pays more than if wilds are used. Finally, unlike most slots, line pay wins in Hexbreaker pay in both directions. If the player can win both ways, only the highest win on that pay-line is awarded. 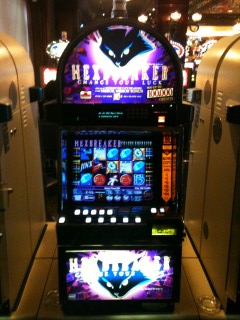 The next table shows the number of combinations for each possible win. Cells are left blank if they don't produce a win. The wild symbol, special rule about the cat symbol, and paying both directions make a mathematical analysis of line pay wins tedious, complicated, and error prone. In my strong opinion, the safest and easiest way to analyze the line pay wins is to score every possible outcome with five nested loops. 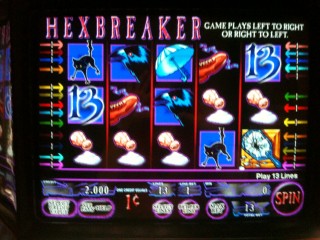 The next table shows the probability of each possible win. The lower right cell shows a hit frequency per line of 3.77%, which was also derived above.

The next table shows the product of each winning probability and what it pays. The lower right cell shows that the player can expect to win 53.22% of his bet per spin from line pays.

The game pays based on the number of Jinx symbols anywhere on the screen. Scatter pay wins are based on the total amount bet. The game pays 150 for five scatters, 13 for four, and 4 for three. For those unfamiliar with Chinese superstitions, the number four is very unlucky, because it sounds like the Chinese word for "death."

The following table shows the probability and contribution to the return for each number of scatter pays. The lower right cell shows a total return of 5.89%. 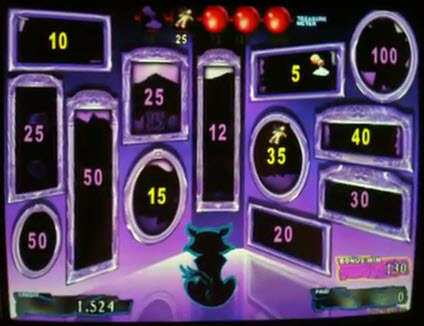 The player will play the Mirror Mirror Bonus if he gets at least four consecutive mirrors on any active pay-line. Wins are based on the amount bet per line.

In the Mirror Mirror Bonus, there are 13 mirrors. The game will randomly place 13 prizes behind the mirrors. The prizes are larger if the bonus is triggered with five mirror symbols. Then, the player gets to break any five of the mirrors and keep the associated prizes.

In addition, the game randomly places five Treasure Symbols behind the mirrors. It is possible that one mirror will have more than one symbol. I assume the way the game works is that one of the 13 mirrors is chosen at random for each Treasure Symbol, even if another symbol was already placed with that mirror.

To see examples, here are my three videos and the starting times of the Mirror Mirror bonuses.

The following table shows the 13 prizes according to whether the bonus was triggered with four or five mirror symbols.

As mentioned above, if the player finds at least one treasure symbol, then he will get a bonus within the bonus. The following table shows the prize according to the number of Treasure Symbols found and whether the bonus was triggered with four or five mirrors.

The next table summarizes all the pieces of the Mirror Mirror Bonus. The lower right cell shows that this feature contributes 17.15% to the return of the game. 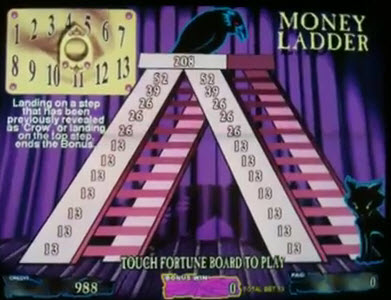 Hoo Doo the cat will start at the bottom of the ladder and move around it counter-clockwise. The player will touch a Ouija Board, which will pick a number from 1 to 13. Then the cat will move that many steps around the ladder. As the player stops on each step, he will collect the prize on that step. Then the prize associated with that step will zero out. Every time the cat moves across the floor to do another lap around the ladder, each remaining prize will increase by the total amount bet. If the cat ever stops on a step he previously stopped on, or at the top of the ladder, then the bonus will be over.

To see examples, here my three videos and the starting times of the Money Ladder bonuses.

The following table shows the probability and expected return from each Money Ladder bonus win. This table was based on a random simulation of over seven billion bonuses. The lower right cell shows an average win of 18.707.

The final table below shows the return of each win category in Hexbreaker. The lower right cell shows a total return for the game of 87.517%.

The returns of other Hexbreaker games likely vary. With most video slots, there are several different versions available, differing mostly by the reel stripping. The casino manager may choose which version to put into the game.

The purpose of this page was not to endorse Hexbreaker as a good or bad game to play but to illustrate general concepts in slot machine design.

If I didn't make myself clear above, I am not claiming this page is an exact depiction of Hexbreaker. Due to repeating symbols I had to make some judgment calls to fill in the blanks. As explained above, there are also different reel strip orders possible given what was observed at the machine.

I would like to thank J.B. for piecing together the 67 to 69 different sequences of three symbols for each reel into a complete reel strip.