In my continued efforts to show the world how video slot machines work, I set out to deconstruct how Blazing Sevens was designed by playing it. There are lots of different "Blazing Sevens" games. The one I am referring to is the five-reel video slot. Armed with a cell phone camera, I recorded about 30 minutes of play. Unlike most video slots, Blazing Sevens has no bonus round. To analyze the game, all I needed to do was piece together the reel strips based on my videos and then do the math.

Much like games I previously deconstructed, Jackpot Party and Hexbreaker, I chose Blazing Sevens because it didn't involve bonus spins. The only mystery was the reel stripping. So I found a game in the Fremont in downtown Las Vegas and recorded 30 minutes of play. These videos can be found on YouTube:

When I returned home, I asked for volunteers to record each sequence of three symbols on all five reels for every spin. I would like to thank Miplet for transcribing part 1 and ChesterDog for part 3. Those two videos I felt were sufficient.

Then I tried to put together the order of the reel strips, based on the observed sequences of symbols. To make the reels balance and loop around, I assumed that some sequences appeared more than once on the same reel strip. These were chosen according to what completed the reels and which sequences occurred more frequently. The reel strips below I believe are very close approximations to the actual ones. However, due to repeating sequences, and a limited sample size of 617 spins, they are probably not exactly correct. I estimate that each reel may have about two incorrect symbols in terms of frequency. 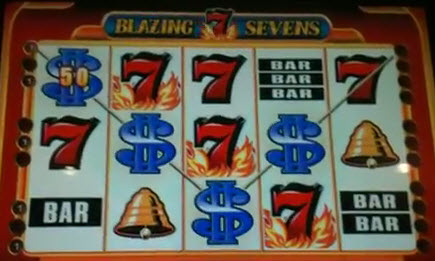 
My sidekick, JB, then wrote a program to assemble the combinations in order. It should be noted that given the sequences observed, multiple solutions are possible. The reel strips below are just one possibility. However, all of them would have the same expected return.

The way multi-line video slots work is they draw random numbers, one for each reel, to determine where on the reel strips to stop. In this case, the game would choose five random integers from 1 to 40, one for each reel. Suppose, for example, the game chose the numbers 24,24,37,11,4 for reels 1 to 5 respectively. Then assume the game maps these number to the top row seen on the screen. In this example, the screen would look like this:

The next table shows the total number of each symbol on each reel, based on the estimated reel strips above. 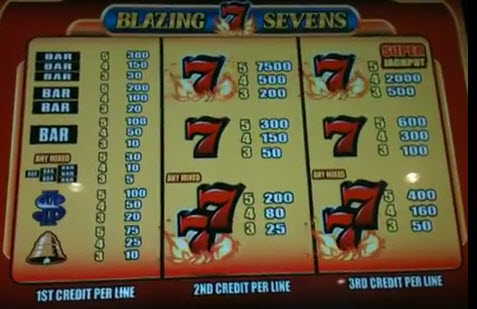 The pay table is easily seen from the rule screens and game glass. Most video slots simply multiply all awards by the number of coins bet per line. Blazing Sevens is different. The first coin enables wins on the dollar, bell, and all bar symbols. The second coin enables wins on all types of sevens. The third coin doubles the wins on plain sevens and mixed sevens, and more than doubles the wins on blazing sevens. The following three tables show the pay table for 1, 2, and 3 coins bet per line respectively. All wins must be left-aligned.

The next table shows the number of combinations for each possible win. In cases where two equal wins are possible, for example three 3-bars or five mixed bars, the game counts it as the one composed of fewer symbols.

The next three tables show the expected return for each win, for one to three coins bet respectively. This is the (amount of the win)*(probability of win). The overall return is shown in the lower right cell of each table.

The following table shows the gross return for (1) Dollars, Bells, and Bars, (2) All Sevens, and (3) Combined. The net return is the gross return divided by the number of coins bet. It shows the more the player bets per line, the greater the return, with a maximum return of 89.09%.

If I didn't make myself clear above, I am not claiming this page is an exact depiction of Blazing Sevens. Due to repeating symbols, I had to make some judgment calls to fill in the blanks. As explained above, there are also different reel strip orders possible given what was observed at the machine.

I would like to thank miplet for doing the data entry on video 1 and ChesterDog for video 3. I would also like to thank JB for piecing together the 40 different sequences of three symbols for each reel into a complete reel strip, as well as for confirming my math was correct.