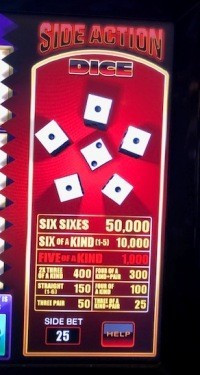 Side Action Dice is the first slot machine side bet I've ever seen, where the outcome of the side bet was completely independent of the what happened in the base game. I saw it on the Tattoo game at the Suncoast on Febuary 5, 2019 at the Suncoast casino in Las Vegas.

The player may make an optional side bet on the throw of six six-sided dice. Following is the pay table. All wins are on a "for one" basis, meaning the player does not get his original bet back, even on a win.

The following table shows the number of combinations, probability of winning, and contribution to the return of all possible outcomes. The lower right cell shows an expected return of 93.71%.

In case you are trying to work out these odds on your own, which I would applaud, here is a breakdown of the ways of losing: