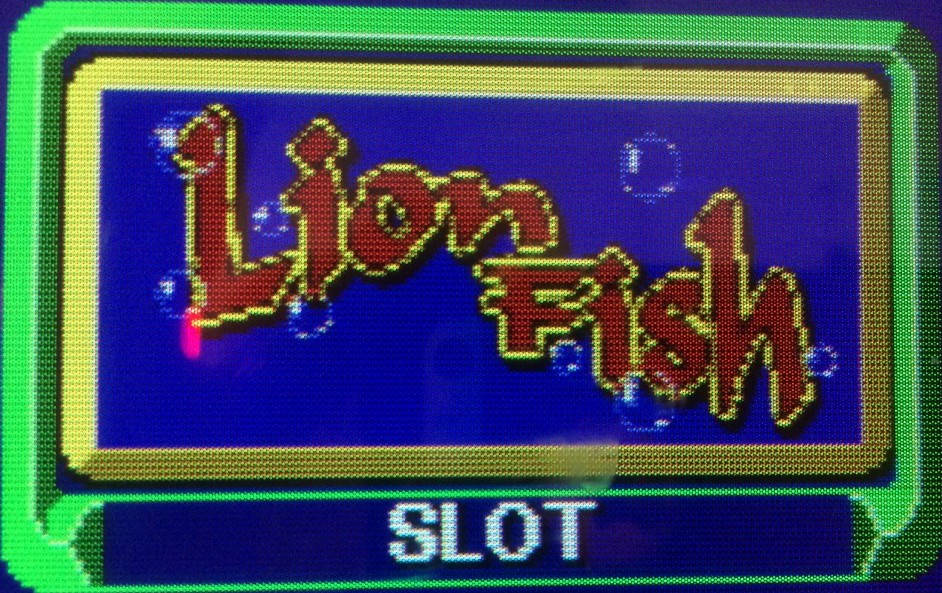 In my endless effort to show how slot machines work, I offer this deconstruction of the slot machine Lionfish. The game can be found on many Game King machines. The reasons I chose this particular slot machine are its widespread availability and that it doesn't have a free spin bonus round. Usually, free spins utilize separate reel stripping, which would have required a prohibitive amount of play to put together the entire free spin reel strips. On the contrary, Lionfish is a simple 5-reel video slot with no bonus round.

Much like games I previously deconstructed, Jackpot Party and Hexbreaker, I chose Lionfish because it didn't involve bonus spins. The only mystery was the reel stripping. I played a game at the Rampart casino in Las Vegas. It was located in a busy area near the security podium so I discretely put my camera in my shirt pocket. I posted on YouTube the video of my play. My apologies for the awful video quality.

I later went home and recorded every sequence of three symbols on every reel. Although many spins were not seen on camera, I still had enough to piece together the reel strips.

Many of the reel strips have the same sequence more than once. For example, the sequence 9-shrimp-J appears twice on reel 3. Because of these repeating sequences, there are sometimes more than one way the reels could have been ordered. I chose one arbitrarily and it may or may not be the same as on the machine itself. However, it doesn't make any difference mathematically. I claim that the symbol frequency I came up with is exactly the same the actual game that I played and every possible sequence in the reels below is also possible on the actual game, and vice versa.


The way multi-line video slots work is they draw random numbers, one for each reel, to determine where on the reel strips to stop. In this case, the game of five random integers from 1 to 30. Let's assume this number gets mapped to the middle position on the screen. For example, if the game chose the number 23 for reel 1, then it would display J-A-Sea anemone, from top to bottom.

For another example, consider this screenshot: 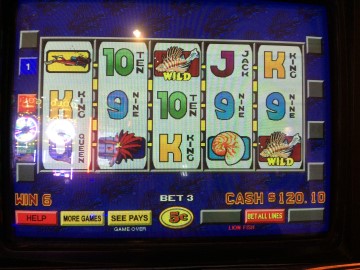 The numbers associated with the symbols seen here, assuming the numbers were mapped to the symbol in the middle row, would be:

In the event the random number chosen is 1 or 30, then the reels wrap around, with position 1 coming after position 30.

The pay table is easily seen from the rule screens, which appears in the table below. The Lionfish is wild and may substitute for anything, including the Diver scatter pay. All line pay wins pay left to right.

The next table shows the number of combinations for each possible win. Cells are left blank if they don't produce a win. The player qualifies for only the highest possible win per line. In the event of a tie, the win is counted under the category of the Lionfish. For example, if the player got Lionfish-Lionfish-Lionfish-9-9, then he would qualify for a win of 100 for either three wilds or five 9's. As mentioned, the player qualifies for only the highest, of which there is a tie. The way I scored this win is three wilds.

Be warned that the math is tedious and error-prone to calculate these combinations by hand. If you're up to the challenge and you can code, then I recommend coding five nested loops and cycle through all 30^5=24,300,000 possible outcomes.

The next table shows the probability of each possible win. The lower right cell shows a hit frequency per line of 4.35%.


The next table shows the product of each winning probability and what it pays. The lower right cell shows that the player can expect to win 50.33% of his bet per spin from line pays.

The game pays based on the number of Diver and Lionfish symbols anywhere on the screen. Remember the wild can count for both a scatter pay and a line pay symbol. Scatter pay wins are based on the total amount bet.

The following table shows the probability and contribution to the return for each number of scatter pays. The lower right cell shows a total return of 39.68%, which is quite high compared to other slot machines, probably because there is no bonus round.

The final table below shows the return of each win category in Lionfish. The lower right cell shows a total return for the game of 90.010%.

The returns of other Lionfish games likely vary. With most video slots, there are several different versions available, differing mostly by the reel stripping. The casino manager may choose which version to put into the game. The range of options tends to be 85% to 97%.