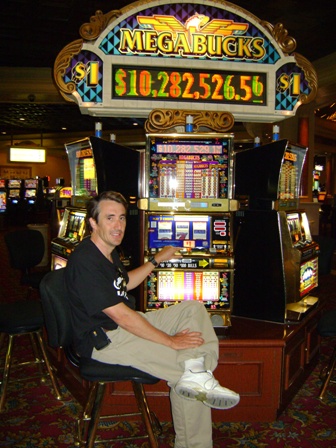 This page investigates the odds of the progressive jackpot slot machine, Megabucks, including the average jackpot and breakeven point.

For now, let's ignore the fact that a jackpot is paid by installments over 25 years and that the jackpot would be subject to income tax.

I don't know exactly how Megabucks is programmed. However, there is some information that is public knowledge. If we fit the pieces together, we can make a pretty good estimate of the point at which the return is 100%, known as the "breakeven point." Here is what we do know:

If j is the jackpot at which the game becomes a fair bet, with a 100% return, then we can solve for j as follows:

The probability of any given jackpot growing this big is 1.41%. At the current rate of play, a jackpot should get this big once every 29 years, on average.

Everything in this page should be taken as a ballpark estimate. Various factors could cause it to be off, including players not betting the full $3 and the fact that while 11 jackpots were hit in the study period, the expected number could be higher or lower.

It also bears repeating that the above does not factor in the annuity or taxes. Let's look at what happens if we do consider those factors. For the time value of money, let's use the return on long-term Treasury Bills. Megabucks jackpots are paid in a 25-year annuity. At the time of this writing a 20-year T-Bill paid 4.58% interest, and a 30-year one paid 4.74%. Let's split the difference at 4.66%. Using some actuarial math I won't get into, the value of the annuity is worth 61.07% of face value, based on that interest rate, and 25 annual installments, at the beginning of each year.

For taxes, let's assume close to the expected jackpot of $15 million. Under 2010 income tax rates, assuming the winner is filing jointly, and all other income exactly equals deductions, the taxes due will be 30.05% for 2010. Assuming no change in the tax law, that will drop over time, because the tax brackets will be adjusted upward, but the winning payments won't be. I tend to think the recent passage of health care will increase tax rates, especially on large incomes. Let's just assume those factors cancel each other out, to keep it simple.

So to keep things in round numbers, the winner will keep 61% after the annuity, and 70% of that after taxes. So the jackpot winner will see about 61% × 70% = 42.7% of his winnings in current dollars. Factoring the annuity and taxes, the breakeven point becomes $75.5 million. The probability of any given jackpot growing that big is about 1 in 283,000, and will happen once every 114,000 years. Again, I'm making lots of assumptions, so these estimates should be considered very rough.

After publishing this article, a reader quoted a page at slot-machine-resource.com, which states that after the first installment is made, the player is given the option to get 60% of the rest immediately, or stick with the installment plan. Tax implications aside, which favor the annuity, the interest rate at which the two options are equal is 4.581%.