Hot Roll is a bonus feature added to various 3-reel slot machines by maker IGT. In the case of this analysis, it is based on the classic game Triple Double Diamond. If the player gets the Hot Roll icon on all three reels, then he will play a craps-based bonus game. In this game, the player will keep throwing two dice and winning money, until he rolls a seven, ending the bonus.

I played 284 spins of this game at the Golden Nugget on January 2, 2014. As I played, I recorded my play and then uploaded the video to YouTube. This page documents my results and attempts to reverse engineer the game to show you how it might have been programmed. For this type of game, with weighted reels, 284 spins is not enough to know exactly how IGT programmed it. What you see in this page is my best educated guess. 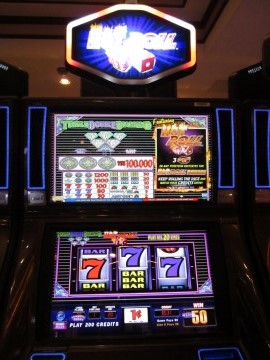 Following are the rules for the base game.

Rules for the bonus game.

Based on my 284 spins, I put together the order of the reel stripping and count how often each reel stopped on each position. The following table shows my results.

The way that three-reel slot machines usually work is to pick one random number for each reel and then map it to a position on the reel strips, according to how each stop on each reel is weighted. It is not unusual for the total number stops to sum to an even power of 2. I don't know the total number of stops for this game but for the sake of example I will assume it is 28 = 256.

The following table is my best estimate of the actual reel weights. I combined trying to keep the proportions the same as the actual data and trying to achieve what I felt was a believable return for the game. You may recall that in my Las Vegas penny slot survey that the Golden Nugget came in 48th place out of 71, with an average return of 90.85%.

The way the game would be programmed, based on these weights, would be to choose three random integers from 0 to 255 (programmers always start counting at zero). It would then map those numbers to a specific stop on the reel according to the following ranges for each stop. The game would then stop each reel on the predestined position in the middle row.


Let's look at an example. Suppose the random numbers were as follows: 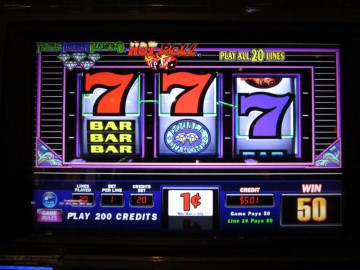 Based on the weights above, the following table shows the number of combinations of each win by its multiplier for reel 1.

Since the reel stops are weighted, this analysis must be repeated for each payline. To prevent this page from getting too long for the other 19 paylines I will just present the return in the following table. Note the bottom right cell shows an average return for the base game of 68.69%. 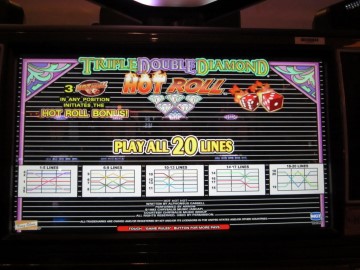 The next table shows the number of combinations for each type of win over all 20 paylines.

Win Combinations over all 20 Paylines

The following table shows the expected number of each kind of win over all 20 paylines. The lower right cell shows the player can expect 1.46 wins per bet.

Expected wins over all 20 Paylines

The following table shows the expected return from each kind of win over all 20 paylines. The lower right cell shows the player can expect 13.737592 credits from line pays per bet. Dividing that by a 20-unit bet, the return from the base game is 68.688%.

Expected return over all 20 Paylines

The next table shows the frequency of each win amount, after applying the multiplier, over all 20 paylines. The lower right cell shows a total win of 13.737592. Dividing this by 20, the total amount bet, results in a return for the base game of 68.688%.

Win Summary over all 20 Paylines

The rules for the bonus are stated in the rules section above. Let's start the analysis of the bonus by solving for the average win per roll, assuming it isn't a seven. The table below answers that question. The bottom right cell shows an average win of 3.733333, assuming no seven.

Next, what is the average number of rolls? If the probability of an event is p then it will take on average 1/p trials for it to happen. The probability of rolling a seven is 1/6, so it takes on average six rolls to happen. However, the player doesn't win anything for the actual roll of the seven, so there are five paying rolls before the seven.

The following table shows the probability of a Hot Roll symbol appearing on each of the three reels as well as the product. The lower right cell shows a bonus probability of 1.13%.

Video of the 288 spins this analysis is based on.

My thanks to Miplet and tringlomane for their help verifying the math above.