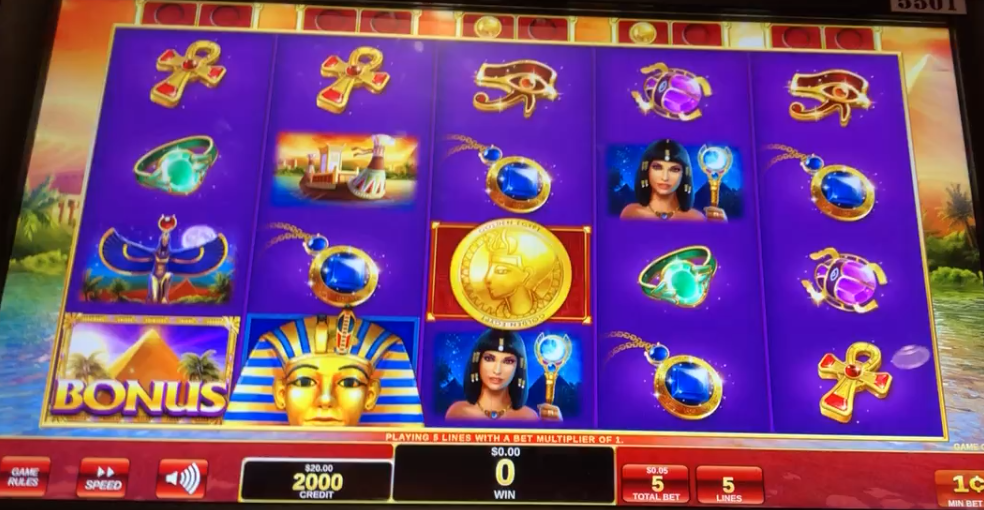 Golden Egypt is what some would call a "variable state" slot machine by maker IGT. It is characterized by earning coin symbols that cause the reels to be entirely wild. If the previous player abandons the game with enough coins, the odds will temporarily swing to the advantage of the next player to play.

Following are the significant rules of Golden Egypt.

Following is the pay table for Golden Egypt

If my explanation of the rules was not clear, here are pictures of the rule screens. Click on any for a larger version.

First let me get my disclaimer out of the way. This analysis is based on a simulation of a game that I created that is based on Golden Egypt, according to my experience playing the game, watching YouTube videos, and industry norms in slot machine design. My game is based on an 86% overall return, which is a conservative estimate on what video slots pay nationwide. Thus, I wish to strongly emphasize the following advice is not based on a real Golden Egypt game, but my best estimate of one. So, take my advice with a grain of salt.

All that said, the following table shows my estimate of the value of the game in any given state. The first column shows the pattern of coins on the machine. For example, 1-0-1-1-0 would mean coins in reels 1, 3, and 4. The middle column represents the value of find a game in this state, measured in bets. For example, a game with a max bet of $25 in the 1-1-1-1-1 state would be worth $25 × 6.79 = $169.75. The right column shows the average number of spins the player will play before the game enters a negative state and the player should stop playing. Patterns not listed are negative expected value and should not be played.