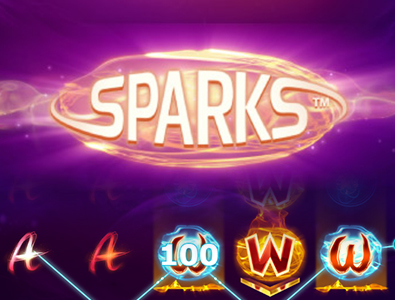 Sparks is a slot machine with a clever twist by NetEnt. At first, it looks like a standard video slot with the usual five reels and three positions per reel. The novelty to Sparks is expandable and cloning wilds.

Expanding wilds are nothing new. If one appears anywhere on a reel then it will expand and cover every position on that reel. However, what is a "cloning" wild, you might ask. As I learned from this game, a cloning wild takes the symbol on the left side of the wild and clones it to the right side. So, between the two identical symbols and the wild in the middle, you have three lined up already, ensuring a win, and maybe more. Expanding wilds appear on reels 2 and 4 only. There are conventional wilds as well.

It should be noted the wilds don't always fully expand. The way they seem to work is they choose a direction randomly and then either expand one or two places randomly. So, if you got an expanding wild on the top row, and it expanded upward, then the expansion feature wouldn't help you at all. I imagine the game designers had to cut the power of the expanding feature, lest the return shoot over 100%.

No, there is no bonus. Based on the relaxing music and soft graphics, this game isn't about excitement but rather being lulled into a blissful state of mind where you can leave your problems behind for a while.

Another interesting feature is that the player may choose to play one direction only, left to right, or both ways. The player does not have to pay extra to play both ways. Instead, I assume, a stingier set of reel strips are used.

In closing, I applaud Sparks for coming up with a fresh idea in slots. At least this is the first time I've seen it. This is not the most entertaining or exciting slot machine I've ever played. Rather, this is the kind of peaceful game I might play for about ten minutes to relax me before going to sleep.

You can play Sparks for free with no sign-up required at Latest Casino Bonuses.

Expanding and cloning wilds on reels 2 and 4, although the one on reel 4 didn't expand. Note how the K in the lower left was cloned to reel 3, and then to reel 5.