Historically, slot machines have been one of the few casino games that were nearly impossible to analyze without inside information about how an individual game was programmed. Every other casino game is open about its rules so the odds are quantifiable. However, with slots, the player is at the mercy of unknown reel strips. The casino doesn't tell the player the distribution of symbols on the strips, nor how they are weighted for single-line slots. While that doesn't seem to bother most players, it bothers me.

In an effort to break this wall of secrecy, I recorded 212 spins of the game Jackpot Party on my cell phone. Then I went home and hand entered every outcome into a spreadsheet. Finally, I did the math to determine what I was up against. This page shows what I found.

I decided to study the game Jackpot Party because it is a simple design and typical of the way video slot machines work. The game is somewhat outdated as I write this, but I managed to find a "classic" penny version at the Wynn on January 24, 2012. Armed with a cell phone camera, I played as fast as possible for eight minutes. I broke for lunch then returned to record another 10 minutes of play. The videos of my play can be found on YouTube:

When I returned home, I hired my brother in law to record, by hand, the three visible symbols on each reel for all 212 bets in the first video. It turned out that video was enough, and I didn't need the second one.

To make a long story short, I found that there were only so many different combinations of three symbols on each reel, just as I suspected. To be specific, from the first video I noticed the following number of patterns for reach reel:

The 212 spins in the first video were enough to ensure I saw every combination at least once. If I found there was a missing segment in the reel strips, I still had the second video to fall back on, but I never needed it.

The next step was like a jigsaw puzzle. I had to find how the different sequences of three symbols overlapped to form a complete reel. It took a few hours, but I eventually figured it out. A tricky part was that in reel 2 one sequence (blue 7-plum-orange) appears in two separate places.

The following table shows the result of many hours of labor, the complete reel stripping for Jackpot Party.

For example, if the game chose the numbers 10,7,7,3,21 for reels 1 to 5 respectively, and mapped them to the position on the reels on the top row on the screen, then the screen would look like this: 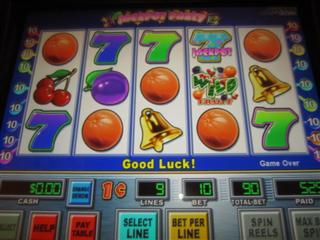 The pay table is easily seen from the rule screens. That is why the first video shows me running through it. There are three types of symbols: the 7s, the fruits, and the bonus. Three to five of the the same colored 7 symbol is a win. In addition, three to five mixed 7 symbols is a lesser win. There are also wins for three to five fruits, but no win for mixed fruits. However, there is a "wild fruit" symbol, which can substitute for any fruit. The player is also paid for 1 to 5 wild fruit symbols. All sevens and fruit wins are left aligned, meaning that all wins start with the left-most reel. The player is paid the highest award per line.

Following is the complete pay table.

The next table shows the number of combinations for each possible win. If you tried to replicate this table it may not come out the same, because some wins can be scored equally two different ways. For example, wild fruit-wild fruit-cherry-blue 7-watermelon wins 5 for either two wild fruit or three cherries. Cells are left blank if they don't produce a win.

The wild symbol and mixed seven wins make a mathematical analysis of line pay wins tedious, complicated, and error prone. In my strong opinion, the safest and easiest way to analyze the line pay wins is to score every possible outcome with five nested loops.

The next table shows the product of each winning probability and what it pays. The lower right cell shows that the player can expect to win 59.60% of his bet per spin from line pays.

There are two "party" symbols on reels 1, 3, and 5. If the player gets one on all three reels, then he will play the bonus. Note that the party symbols don't need to be on the same line. It is scored as a "scatter" symbol, meaning it can be anywhere to get credit for it.

You can see an example of a bonus round at the 3:20 point in the first video.

In the bonus round there are 30 gifts. The player will keep picking gifts and accumulating the money inside them until he selects a "Party Pooper." There are six Party Poopers. Even the Party Poopers have a minimum win of 1. The following table shows how all the prizes are distributed. All prizes are relative to the total amount bet on the initiating spin.

An 86% return is pretty low for a slot machine. However, it doesn't come as a surprise to me. This is a penny game in a luxury casino, which both work against a high return. This does not mean that Jackpot Party is always set to 86%. The slot maker, WMS, would have other versions available, letting the slot director choose which program chip, known as an EPROM, to put into the machine.

The purpose of this page was not to embarrass anybody but to show an actual example of how a slot machine works.