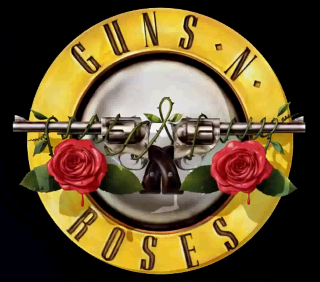 Net Entertainment did an outstanding job with Guns N' Roses (GNR). The video, graphics, sounds, and design all come together for a game that is about as good as it gets with online slots. There are all kinds of features and bonuses happening. If you play slots to gently be lulled into hypnotic state as you watch reels spin, this slot is not for you. On the other hand, if you're a slot player with attention deficit disorder, who needs to be surprised with something on almost every spin, then Guns N' Roses was made for you.

The band Guns N' Roses should need no introduction. You might think it would be hard to capture the essence of a 1980's hard rock band into a slot game, but Net Ent does a great job of it. Starting with the music, the game features a soundtrack of five of GNR's biggest hits. Whenever the player hits a big win or a bonus, it is glorified with concert footage. The reels themselves are framed within a concert screen, to give the feeling that you're at a concert and playing a slot machine at the same time.

However, it is the design that I mostly pay attention to, and GNR does not disappoint in that department. There are all kinds of features, many of which I have never seen before on a slot machine. The only way to properly break it down is to go over the various parts of this game one item at a time. 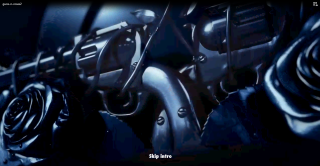 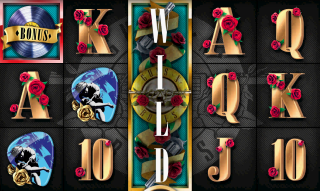 Expanding wilds are seen with high frequency on initial spins in GNR. For those unfamiliar with the term, it means that if a wild appears anywhere, then it will expand and cover every position on that reel. GNR has both expanding and non-expanding wilds in initial spins. 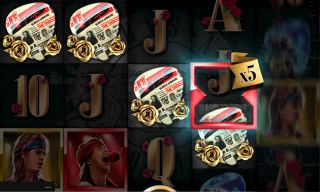 This is another feature to GNR I've not seen before. It is a bit hard to describe, and I'm still not 100% sure I understand it correctly.

However, according to my interpretation of the rule screens and having played through this feature a few times, the Solo Multiplier seems to occur randomly if the first three reels result in a win on at least one pay line. If the game does trigger this feature, then the player will win a multiplier of 5x to 10x. The way the multiplier is presented to the player is reel 4 resulting in a winning four of a kind an equal number of times to the multiplier. However, this stage is all for show, and the player doesn't win anything; these spins done for dramatic effect only. When the player stops getting four of a kinds, the multiplier will be shown to the player and it will apply on the subsequent spin. 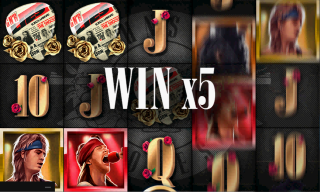 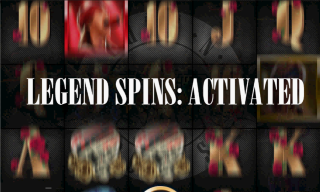 Legend Spins is yet another novel idea to GNR, at least as far as I know. The way it works is it will randomly trigger on initial spins. It doesn't happen very often, so pay attention when it does. After a little introductory fanfare, the player will get three Legend Spins. In the first Legend Spin, reel 3 will be overlaid with a stacked wild symbol. In the second, reels 1 and 5 will both be entirely wild in the same manner. Finally, in the last Legend Spin, reels 2 and 4 will be entirely wild. 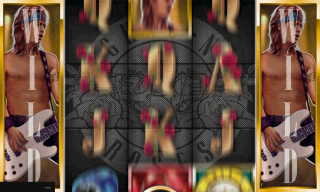 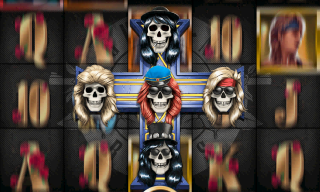 I hope you readers are happy for I had to play at least 1,000 spins before getting this feature. The way it works is on a random and very infrequent basis the game will reveal that the player has won the Appetite for Destruction Wild by showing five wilds in a cross symbol in the center of the screen. That part is just for show. It then disappears and comes back, with the center in one of the three positions of reel 3. Naturally, the player would want it in the center position, to have five wilds. 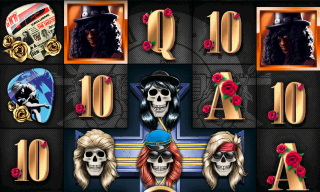 The one time I got it, the center was in the bottom position, as shown above. Nevertheless, getting three wilds in a row horizontally is almost certainly a four of a kind win (unless the first reel has a bonus in front of them) and possible five of a kind. Not to mention that every other pay line will go through one or two wilds. While I didn't win that much, I'm sure the average win is very high, which probably accounts for why it doesn't occur very often. 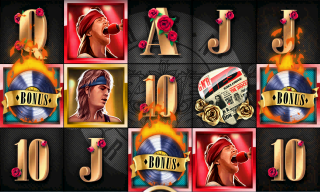 If the player gets three platinum records anywhere on reels 1, 3, and 5, then he will trigger the Bonus Wheel. There are three possible outcomes — the Crowd Pleaser bonus, the Encore Free Spins bonus, or a direct credit win. The possible outcomes are depicted on a record. Where the record needle stops determines what the player wins. 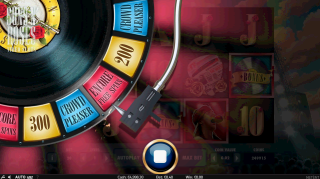 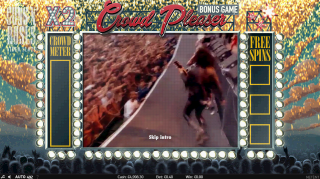 The Crowd Pleaser bonus is a three-stage pick 'em bonus. In stage one, the player picks three out of eight icons. If the player wins more than so many credits, which he usually does, then he goes onto stage two. Stage two is the same as stage one but with larger prizes and a higher threshold to advance to stage three. In stage three, the prizes are again larger. If the player reaches a total of 800 credits, which is hard to do, then his win will be doubled. To make things more interesting, the player can also win extra picks and free spins along the way. 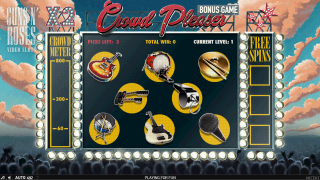 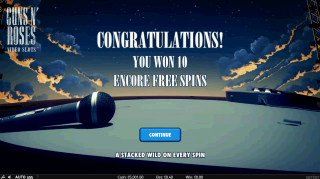 Who doesn't love an encore? I think encores have become so ubiquitous in concerts, that the first one should be considered expected, and any additional ones after that as icing on the cake. However, I digress.

In the Encore Free Spins bonus, the player gets ten free spins. Any self-respecting free spin bonus makes something special about the free spins, and GNR is no exception. In every free spin, the game will choose a random reel to be entirely wild as represented by three stacked positions of the band members. Both the reel and band member are chosen before the other reels stop spinning and overlay that reel. Furthermore, that band member will become wild on the other four reels. 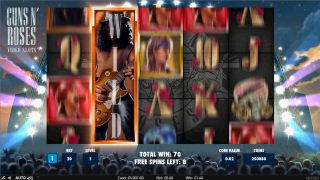 Let me give my compliments to everybody at Net Entertainment involved in creating this slot machine. I could just picture a meeting where their entire slot department bandied around ideas to put in the game. In the end, somebody probably said, "What the heck, let's do it all!"

If they hired an independent contractor to do the math on this game (*ahem*), I hope they paid him well as this is perhaps the most mathematically-complicated slot game I've ever seen. However, you players don't care about that. You may wonder with all these features and wild reels coming at the player for all kinds of reasons, how does the player not win like crazy? First, some of the more lucrative features, like the Legend Spins and Appetite for Destruction Wild, don't occur very often. Second, the pay table is rather soft. The lowest five of a kind pays only 50, for example. So, be prepared for it to seem like you're winning more than you really are.

To conclude this conclusion, let me say again that this game is a great combination of both art and design. I don't know what the actual band had to do with it, but if I had the chance to meet the real Guns and Roses I would say, "Slash, I like your hat!" Then, if they were still speaking to me after that stupid compliment, I would say that Net Entertainment did them proud.

You can play Guns N' Roses for free with no sign-up required at Latest Casino Bonuses.