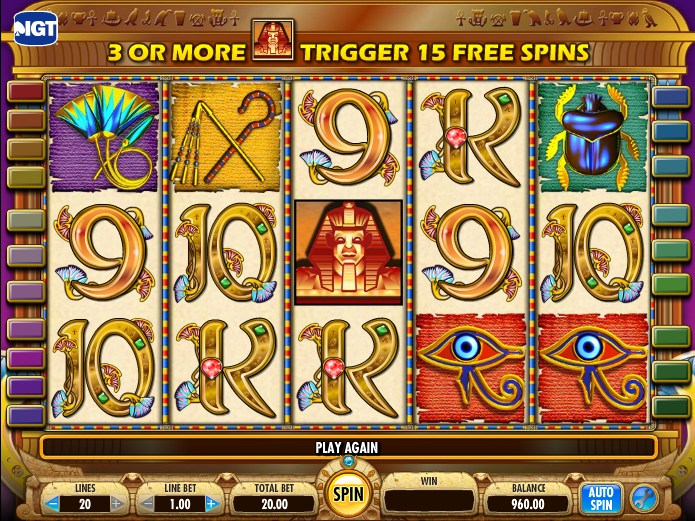 In my continued effort to pull the veil of secrecy away and show how slot machines work, I offer the following deconstruction of the popular IGT game Cleopatra. This is a simple five-reel video slot with a free spin bonus.

The version this analysis is based on is the one that can be played for free at FreeCasinoGames.net.

Our friends at Casino Guru were kind enough to provide the reel strips for the game at Vegas Slots Online. I believe they pieced them together from a lot of playing, the same way I did other slot deconstructions, like the one of Lionfish.

The way video slots like this one work is to choose a random number for each reel, from 1 to the number of positions in the reel, and map the random number to the corresponding position on the reel. In other words each position on a given reel is equally likely. The number of each symbol on each reel is carefully chosen to achieve a desired return. Following are the reel strips for Cleopatra. Note that reel 5 is longer than first four reels. 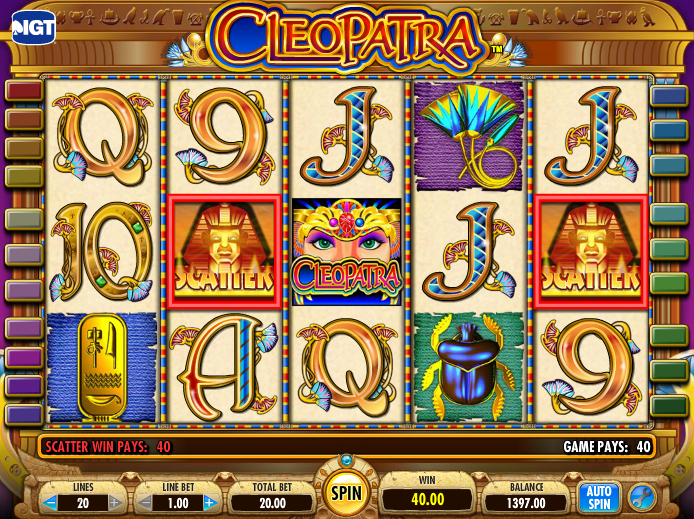 For an example, consider this screenshot above. Assume that the random number chosen is associated with the symbol appearing in the top row. This configuration would occur if the random numbers chosen were as follows:

In the event the random number chosen is last or second to last on the reel, then the reel would wrap around, with position 1 following the last position on the reel.

The pay table is easily seen from the rule screens, which I also show in the table below. Cleopatra is wild and may substitute for any symbol except the Sphinx. In addition, one or more Cleopatra symbols will double any win, except wins based only on Cleopatras. In the event the player qualifies for two possible wins on the same pay-line, because it started with two to four wilds, the game will choose the higher of the two wins. In that event results in a tie, I count it as an all Cleopatra win in the tables of winning combinations later on. For example, Cleopatra - Cleopatra - K - Q -J, which can be scored as 10 for either two Cleopatras or a doubled three kings, is counted as two Cleopatra win.

The next table shows the number of combinations for each possible win when no wilds are involved in the win, except all wild wins. In other words, wins that are not multiplied. Cells are left blank if they don't produce a win.

The next table shows the number of combinations for each possible win when at least one Cleopatra involved in the win, except all wild wins. In other words, wins that are doubled.

Be warned that the math is tedious and error-prone to calculate these combinations by hand. If you're up to the challenge and you can code, then I recommend coding five nested loops and cycle through all 30^4*41=33,210,000 possible outcomes.

The next table shows the probability of each possible win for the doubled wins. The lower right cell shows a hit frequency per line of 2.11% for doubled wins.

The next table shows the product of each winning probability and what it pays for doubled wins. Each cell is the product of the probability of winning, the win, and 2. The lower right cell shows that the player can expect to win 40.89 % of his bet per spin from doubled line pays.

The final line pay table shows the combined return between doubled and non-doubled wins for each type of win. The lower right cell shows that the player can expect to win 52.05% of his bet per spin from line pays.

The Sphinx is known as a "scatter pay" symbol. It pays based on the number that appear anywhere on the screen. They do not have to be left aligned or on the same pay-line. Scatter pay wins are based on the total amount bet, as opposed the bet per pay-line.

The final table below shows the return of each win category in Cleopatra. The lower right cell shows a total return for the game of 95.025%. The rule screens on the online game claim a return of 95.02% (perhaps they round down). Now you understand where it comes from.

The table below is based on a 20 random simulations, one for each number of lines bet, of 100 million spins in each simulation. The data was kindly provided by Casino Guru.