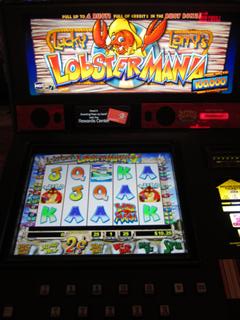 In my continued effort to lift the veil of secrecy behind slot machines, I present the following analysis of the IGT game Lucky Larry's Lobstermania. The information regarding the design of this game is taken from the academic paper PAR Sheets, probabilities, and slot machine play: Implications for problem and non-problem gambling by Kevin A. Harrigan and Mike Dixon, University of Waterloo, Waterloo, Ontario, Canada.

The authors of the paper obtained par sheets for the game through the Canadian Freedom of Information and Protection of Privacy Act. I applaud the government of Canada for this release. The purpose of this page is to further the analysis of Lobstermania beyond what was presented in the Harrigan and Dixon paper.

It should be noted there are other versions of Lobstermania besides this one. As far as I can tell they differ by small changes to the pay table and details of the bonus round.

Harrigan and Dixon give the symbol distribution for two Lobstermania par sheets, one for 85.0% and the other for 96.2%. Both are presented below. Notice how the 96.2% version has more high-paying symbols and that any given symbol is distributed more uniformly across the 5 reels. To illustrate that the distribution is more choppy in the 85.0% version, notice that the number of clams per reel on the 85.0% version is 10,8,3,4,7. On the 96.2%, the distribution is 6-6-5-6-6. However, the number of key symbols (wild, scatter and bonus) are the same in both games.

Harrigan and Dixon do not indicate the exact reel stripping. However, as long as the scatter symbols are not so close on the same reel that they can appear at the same time, the symbol order does not matter for this game, as well as for most video slots. The following reel stripping is hypothetical, based on the 85.0% version.

The next table shows the Lobstermania pay table. All wins must be left aligned. The wild symbol can substitute for any line-pay symbol.

There are 47 × 46 × 48 × 50 × 50 = 259,440,000 possible outcomes in Lobstermania. The following table shows how many of these combinations result in each possible win. These figures are the result of a program with five nested loops that tallied the total for each win for each possible combination.

The next table shows the contribution to the return for each possible win. Each cell is the product of the probability, from the table above, and the pay table. The right cell shows a total return from line pays of 55.28%.

The player gets credit for a "scatter pay" symbol if it appears anywhere on the screen. Scatter pay wins are based on the total amount bet. The following table shows the number of scatters per reel, total symbols per reel, and the probability of a scatter on that reel, which is 3×(column 2)/(column 3). The reason for multiplying by 3 is there are three visible positions on each reel.

The next table shows the probability and contribution to the return for 0 to 5 total scatter symbols. The lower right cell shows that the scatter pay feature returns 10.65% to the return of the game.

There are three parts to the bonus game, as follows:

There are three possibilities for the number of lobster traps, 2, 3 and 4, each with equal probability. Thus, the expected number of traps is 3.

The prize per lobster can be anywhere from 5 to 250. Each prize has an associated weighting, as shown in the table below. The way the game might work is it would pick an integer from 1 to 322 and map it to a weight according to this table. The bottom right cell shows an average win of 44.02 per lobster.

The following table summarizes the three ways to win in the game. The bottom right cell shows an expected return of 85.012%. In other words, for every dollar the player bets he can expect to get back 85¢.