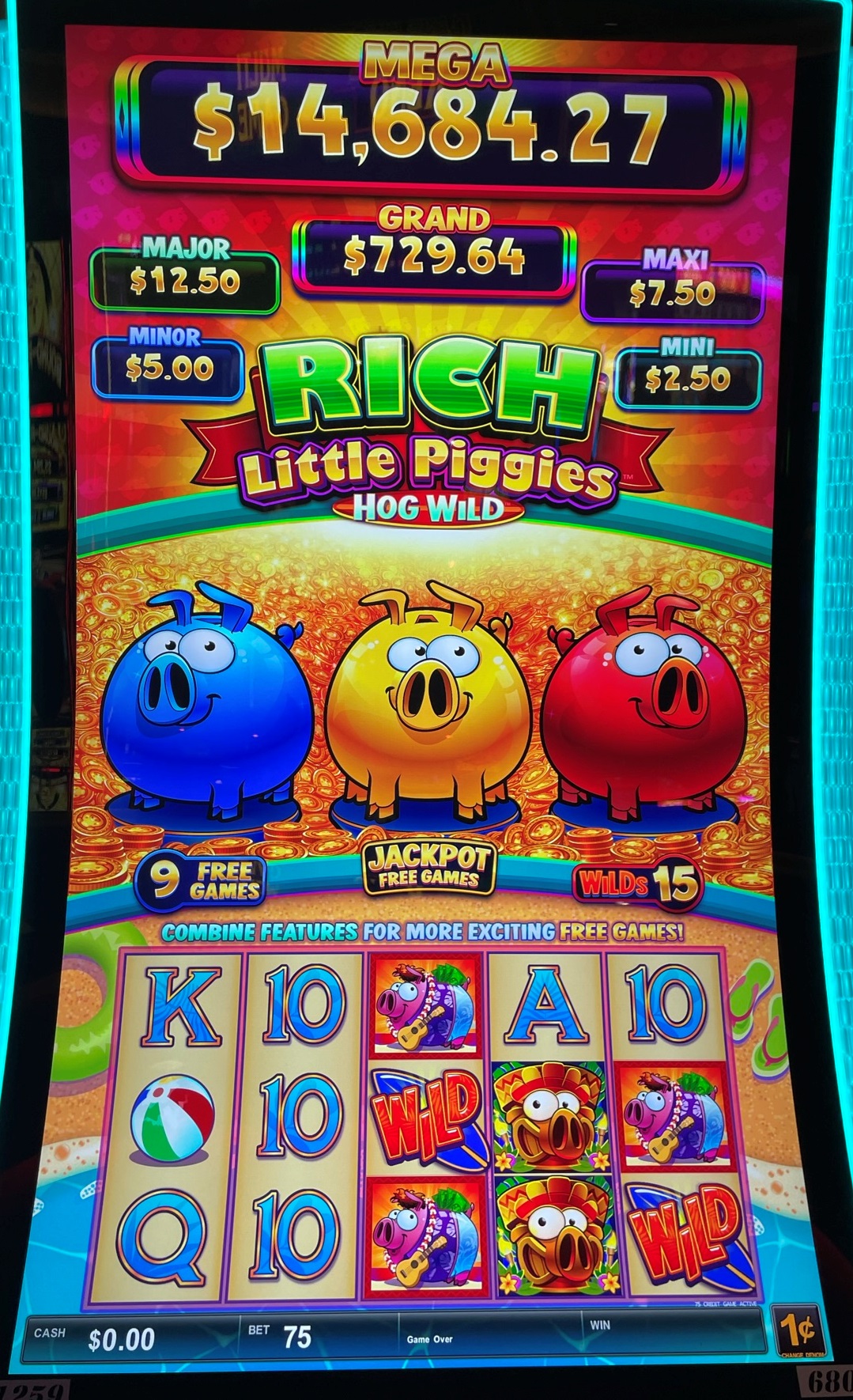 Rich Little Piggies is another variable-state slot machine that may offer a player advantage in some situations. The gist of the game is coins are found as the player plays. These coins sometimes fall into one of three piggy banks. As they do value is added to a bonus game associated with that color piggy bank. You can also see piggy banks getting larger as more coins are added. Sometimes, a coin will trigger the bonus associated with that piggy bank. If the pigs get fat enough, especially the blue one, the game may offer a player advantage. Opinions on this game vary, so take my advice on this one with more than a grain of salt.

The following are the rules to the Meal Ticket version of Rich Little Piggies.

Machine advantage players disagree with each other more sharply on this game than other variable-state machine I have written about. My advice is based on the collective opinion of such players, putting more of a weighting on some players than others.

Some advantage players will report a net lifetime loss on this game and say they have given up on it. Some go onto say it is an advantage player trap, trying to lure players in with the temptation of fat pigs, but rarely, if ever, gets positive.

Both sides seem to agree it is a volatile game that you need to hit multiple bonuses at the same time on to come out ahead, preferably the blue and yellow, or better yet, all three. If you don't hit the Blue and Yellow together, you will probably lose at your session. However, if you do hit the Blue and Yellow together, with a lot of free games in the Blue piggy bank, you'll have a good shot at winning the large progressive jackpots. That is how to come out ahead on this game. Comparisons might be made to video poker. Sometimes video poker can offer a mathematical player advantage, but if you don't hit a royal in your session, you'll probably lose.

That said, my advice is simple. Play if the Blue piggy bank has at least 18 free spins. Some advantage players have said that is not enough and the right number is more like 25. The right entry point number is probably in that range somewhere. Keep in mind this is a high-volatility play. If you have a small bankroll or are more risk-averse, for whatever the reason, then be more picky about your entry point.

Why don't I look at the Yellow and Red pigs? As mentioned before, the value in this game is in hitting multiple bonuses at the same time. The Blue pig determines the number of free spins and thus the biggest driver of the value of the bonus. Advanced players might consider the Yellow and Red in borderline cases.

As with any variable-state slot machine I write about, take my advice with a teaspoon of salt.

Discussion about Rich Little Piggies in my forum at Wizard of Vegas.