Home › games › Magic of the Nile

Magic of the Nile

Magic of the Nile is a variable-state slot machine that sometimes offers a player advantage. The gist of the game is the players vest into collecting gems. These gems can be red, blue, or green. When the player collects three of the same color, he plays a free feature spin, which usually pay between 10x and 25x the amount bet.

To have an advantage, the slot player, or "vulture" as they are often called, should play only when there are sufficient gems left by the last person to play. The number of gems is clearly indicated by the number of pieces lit up on three obelisks. For example, in the image below, the game is in a state where two gems of each color have already been collected, which is as good as it gets. 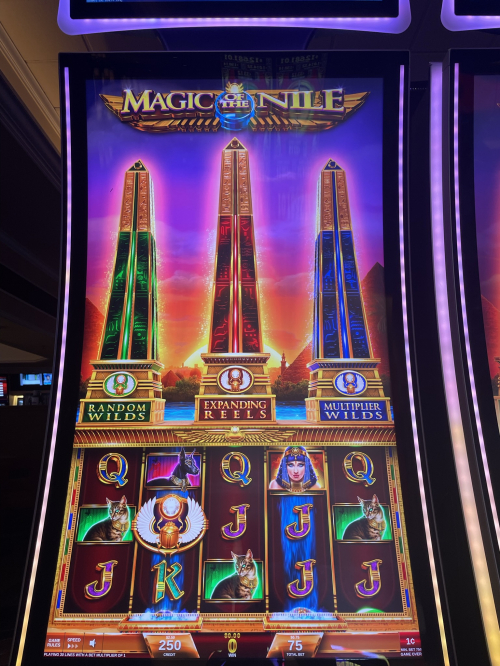 Following is the pay table. Wins are left to right only. Wild symbols do not appear on reel 1, thus there are no wins for wilds only.

The following thumbnails so all 23 rule screens. Click on any image for a larger version.

The player will get a Random Wild feature spin for getting all three pieces of the green obelisk. In that feature spin, the game will scatter five to ten wilds randomly on the screen before the reels stop spinning. These wilds stick in place. Whatever symbol would have normally been behind the sticky wilds is irrelevant.

In the example below, the game awarded me six sticky wilds. After the reels stopped, a seventh wild stopped in the lower position of reel 4. My total win was $10.45, or 13.93x the amount bet on the initiating spin.

The player will get a Random Wild feature spin for getting all three pieces of the red obelisk. In that feature spin, the reels expand from three rows to six. More importantly, the number of paylines increased from 30 to 75. I am quite sure more liberal reel stripping is used as well.

The player will get a Multiplier Wilds feature spin for getting all three pieces of the blue obelisk. In that feature spin, all wilds turns into 2x wilds. Any win involving a wild, which will probably be most of them, will be doubled. Remember, going through two or more 2x wilds still doubles the win only.

When are there enough lit obelisk pieces for the odds to swing to the player's side? That is the big question. My answer to that is based mostly on the opinions of slot vultures who play this game and were kind enough to share their thoughts, under condition of anonymity.

While opinions varied, everybody said it was better two have two pieces of one color than one each of two colors. Most players mentioned they thought the green obelisk, which leads to the random wilds, was the least valuable, with the red and blue being about equally valuable. However, some players had no opinion on which colors were the most valuable and treated them all equally.

Everybody mentioned that another factor was the casino itself. The tighter the slots, the more pieces it would take to play. As I have said many times, there is a strong positive correlation between how nice and expensive a casino is to the tightness of its slots. Casinos that cater to tourists also have tighter slots, in general, than casinos that cater to locals. Finally, you can tell a lot by how tight the slots are by how tight the video poker and video keno are, which are quantifiable.

There was a strong consensus to not play with three or less pieces. Some players said they might play three pieces if two were of the sale color and it was a loose casino that was generous with comps and mailers. However, most said they require at least four.

There was also a strong consensus to play with five pieces. I don't think I spoke to any player who sounded like he knew the game who wouldn't play with five or six.

Four pieces is where opinions differed a lot. Some said they would only play if two colors had two pieces each, while others said they would play with any four, including a 2-1-1 situation. A frequent comment was that four was a borderline case and they would factor in the casino itself and sometimes how may green pieces were lit, which some feel are less valuable than the red and blue.

The game offers five different bet levels. Each is like a separate game, left in a separate state. Fortunately for slot vultures, the betting panel shows the number of each obelisk pieces that are lit up at all five levels. They make it even easier, by showing the gem above the obelisk sparking like a diamond if there are at least two pieces lit up. For example, in the image below the $0.75 and $6.00 bet levels have two pieces lit up on each, and the jewel above those obelisks is sparkling. 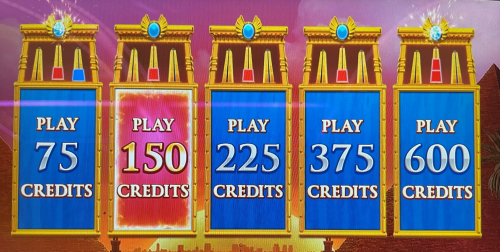