Founded in 2014, Arrows Edge is a gaming software designer that has put out a small library of games that include slots, table games and video poker. As of this writing, a small number of casinos carry Arrow's Edge games.

The games listed under the Cash Grab Slots and Vintage Table Games were acquired by Arrow’s Edge some time ago, however they were not actually developed by the group, and are not indicative of what their the game development standards, as evidenced by their Super Slots games. We have received word that they are actually in the process of updating the games to support newer technology, which will alleviate Java issues that are caused by their current versions.

Speaking of Java issues, doing this review in the first place proved to a small challenge. Google Chrome simply did not support the games. I got an error message saying that if I wanted to play them I would have to use another browser. When I tried using Internet Explorer, which tends to be more forgiving of questionable applications, I had to update my version of Java and then was finally able to play.

I must say that I found their older Cash Grab Slots and Vintage Table Games to be quite dated. It should also be noted that in the course of playing for this review, I got the same card twice in video poker. More about that in the video poker section. However, I think it goes to show that I would be careful with this software to make sure it pays correctly.

If you like your table games retro style, like what Java casinos looked like in the early 2000's, then you'll like what Arrow's Edge has to offer. It isn't just the graphics and sound that seemed about 15 years dated but the game selection as well. Arrow's Edge offers Casino War, Caribbean Stud Poker, Let it Ride, and Red Dog all of which are extinct or near extinct here in Las Vegas. If you don't like playing dated carnival games, the classics of blackjack, craps, and roulette are there too.

The table minimums are nicely low at $1, with the exception of pai gow poker, which shoots up to an extravagant $25.

The standard baccarat rules are followed. The tie bet pays the stingy 8 to 1 odds. The rules do not state the number of decks, but it doesn't matter much. Assuming eight decks the house edge on each bet is:

The blackjack rules are as follows:

Using my house edge calculator, I get a house edge of 0.72%, which is quite high for an online blackjack game.

Please note the house edge in Pokerjack is much less.

Following is the basic strategy you should use under these rules. 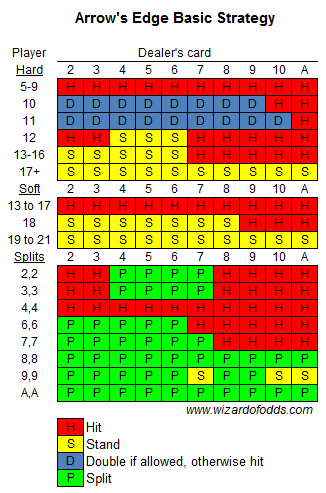 The standard Casino War rules are followed, including six decks of cards. There is no bonus for a tie after a tie. The tie bet itself pays the stingy 10 to 1 odds.

The odds in Craps are the standard stingy American odds. Only 2x odds on line bets. The hop odds are the stingy 15/30 to 1. Even the field pays the stingy odds of only 2 to 1 on both the 2 and 12.

The game also seemed rather buggy to me. I was not able to place or lay the odds on don't pass and don't come bets of less than $5. Be careful to click the "clear table" or "collect winnings" after a win or you're apt to let whatever you just won ride on the next roll.

This game is referred to as "Let it Ride" in the game menu, at least at the Drake casino, but as "Ride Em Poker" on the felt. I'm not big on changing game names in a thinly-veiled attempt to avoid paying royalties so I'll stick with calling it Let it Ride.

The usual online pai gow poker rules are followed of a 5% commission and no player banking. The A-2-3-4-5 straight is the second highest (A rule I hate). There is no house way button and the cards are not arranged in order for the ease of setting your hand.

One nice thing I'll say about Arrow's Edge table games is the minimum bet is usually just $1. Not so with Pai Gow Poker. To get you a screenshot of an actual hand, I had to bet the minimum $25. The sacrifices I make for my readers. So, after throwing out the big bet what happens? A jack-high pai gow, which you can see pictured here. Oy!

Pokerjack is a blackjack game with two poker-based side bets. The twist is that if the player splits his blackjack hand then he must also split his side bets. The odds on the side bets are not very good so I would leave them alone so you're not tempted to retain a pair you should split anyway.

Following is the basic strategy you should use assuming no side bets. 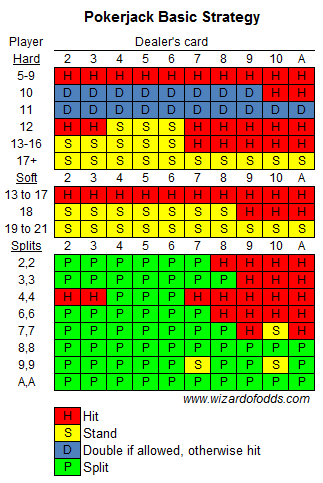 For more information, please check out my Pokerjack page.

Based on the selection at the Drake Casino, there seem to be two kinds of Arrow's Edge slots.

The first can be found under the "Super Slots" menu. These games are pretty good, featuring opening animation, fun animation and sounds, and some creative bonus games.

The games listed under "Cash Grab Slots" were acquired by Arrow's Edge some time ago and are seem dated in comparison to their Super Slots games. I understand that Arrow's Edge is in the process of phasing these older games out.

There are four single-line video poker games to choose from. Unlike most other video poker games, there is no incentive to make a max-coin bet. The pay tables are generally standard, except the lack of the big win on a royal. Jacks or Better is an exception, but that game depresses the win on the straight flush and four of a kind. These games have no auto-hold except wild cards are automatically held in wild card games. What they title "Joker Poker" is actually "Double Joker Poker."

You will also notice a "jackpot" field in the five-line games. When I played it was $4,302. It makes no difference the game, denomination, or number of coins bet — the jackpot is always the same. I asked support about it and I was told was that it could be won anytime and it was random. My interpretation of that is that there is a separate mechanism apart from the cards that awards the jackpot. If they designed the game properly, then the probability of winning would be proportional to the bet amount. I asked support about this probability but all she would say is that it was "random."

Next, I have to bring up this hand I got playing 5-play Double Bonus. 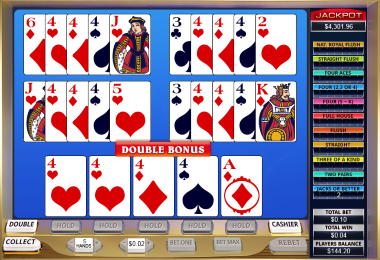 Note how I got the four of hearts twice on the bottom hand. Despite getting a three of a kind four times and one four of a kind I was paid for a jacks or better twice. I complained about this to Drake casino support three times and never got a reply. However, when I made contact with Arrow's Edge software they took it very seriously and took the game down until the problem was fixed.

To summarize, the pay tables on these games are fairly poor. The returns range from 92.10% to 98.78%, not including the unknown value of the mystery jackpot. Online, I think there is no reason to settle for less than 9-6 Jacks or Better at a return of 99.54%.