Casino War is without a doubt the easiest card game to play in the casino. If you have ever played war as a child, or simply made a bet on who could draw the highest card, then war will seem instantly familiar. Following are the specific rules. 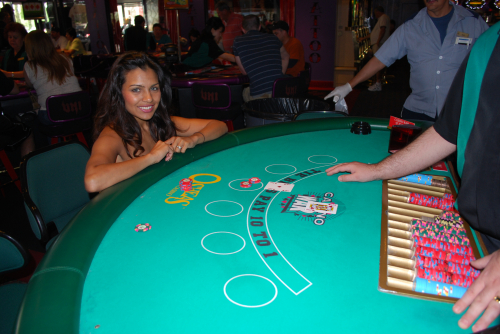 I'm often asked where the house edge lays in this game. Where the edge comes from is when there is a war you either win one unit or lose two. For example, if you originally bet $5 you have to double your bet, risking $10, to win only $5.

The following table shows the possible outcomes in a six-deck game with no bonus for a tie after a tie, assuming the player always goes to war.

The element of risk under these rules is 2.70% and the standard deviation is 1.05.

The next table shows the possible outcomes in a six-deck game with a bonus equal to the Ante for a tie after a tie, assuming the player always goes to war.

Some Interent casinos use unusual number of decks. The following table shows the house edge under the bonus rules, normal "no bonus" rules, surrendering on ties, and the tie bet itself.

The following table shows the probability of winning and expected return on the Tie bet, assuming it pays the usual 10 to 1.

At Internet casinos using Habanero Systems software, the tie bet pays 11 to 1. With six decks, this lowers the house edge to 11.25%. While still a terrible bet, it's an improvement over the 18.65% house edge paying the usual 10 to 1.

German translation of this page.