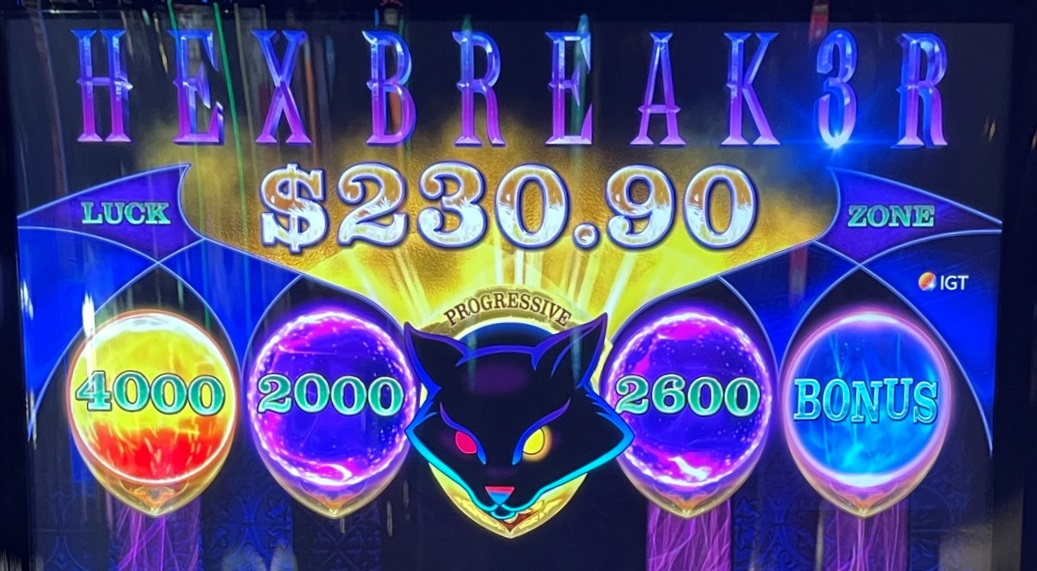 Hexbreak3r, also known as Hexbreaker 3, is a popular slot game by IGT that is sometimes in a positive state. This make the game an advantage play sometimes.

The gist of the game is the number of symbols displayed on each reel varies, from 3 to 8. Whenever the player earns a horseshoe symbol, the reel will expand by at least one position, up to a four. When the player earns a horseshoe on a reel that already has eight positions showing, the player will win something and that reel will reset to three positions. When the reels are long enough, the game offers a player advantage.

The following are the significant rules to Hexbreak3r. This is not necessarily a complete list, but I believe hits on everything pertinent to the game.

The free spins in the Bonus have much the same rules as paid spins, except as noted below.

If my rules above were not clear, I invite to you read the rule screen directly below. Click on any thumbnail for a larger version.

Please take the following advice with a grain, no make that a teaspoonful, of salt. This analysis is based on educated guessing and the advice of some advantage players who have been generous with their advice, unlike most AP's. Please also use your best judgement as well to determine when the odds are in your favor.

For my advice on when to play, I define the "combinations" as the product of the reel lengths shown across all five reels. For example, in the image below, the number of combinations is 6*4*3*6*6 = 2,592. This figure is also conveniently shown in the lower left side of the game screen.

I shall refer to the "height" of a reel as how many positions are shown. For example, in the image below the height of reel 1 is 6. 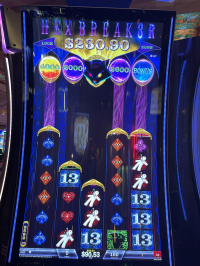 The advice given is for the average casino, which I assume to have an RTP (Return to Player) of 90%, including the value of points. In borderline line cases, the player should be more inclined to player at generous casinos and less at stingy ones.

That said, my preliminary advice on Hexbreak3r is to play if any of the following conditions are met:

Please note that the reels advance at different rates. Reel 3 advances very slowly, about 1 position every 1,900 spins. Reels 2 and 4 advance the fastest. In general, the faster the reel advances, the lower the prize in the Luck Zone.

It should be noted that the game in the panel of the game where the player chooses how many credits to bet, the game will usually illuminate at least one in yellow and the words "hot bet." I am not sure what criteria need to be meet to be considered a "hot bet." Do with this information as you wish.

Discussion about Hexbreak3r in my forum at Wizard of Vegas.