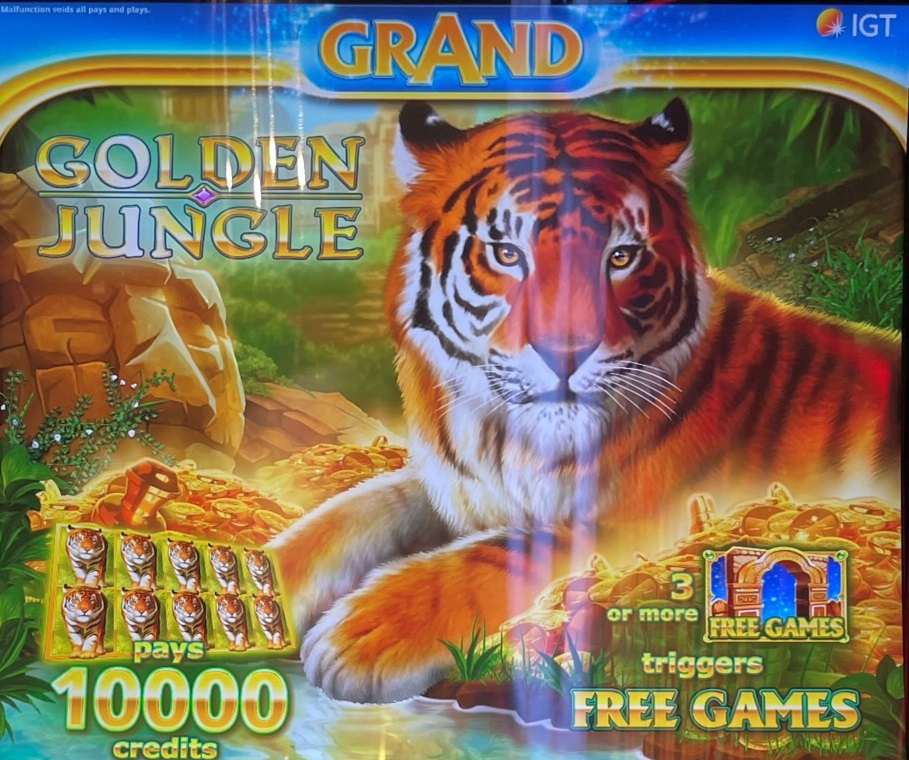 Golden Jungle Grand is a "variable-state" game, meaning the expected return of the next game depends on the state it was left in by the previous player. In particular, the game has a special feature where every tenth game the player is eligible for fully wild reels, according to outcome of the nine previous games. If the game is left in a state close to that special 10th spin and/or with lots of accumulated Golden Vishnus.

The game was made in 2018 by Unity, which is a branch or subsidiary of IGT.

I won't get into all the rules, because the player doesn't need to know them to successfully play this game. Following is the executive summary, with an emphasis on the rules needed to play this game with an advantage.

For further information on the rules, please click on any of the following thumbnails of the rule screens.

When does this game have a 100%+ return? Before I answer, let me give the disclaimer that I don't know exactly how this game was designed. To analyze the game, I reverse engineered a similar game, with carful attention to the ten-game cycle feature and test in all 2,430 possible game states. I get that number from all five reels having 0, 1, or 2 Golden Vishnus (GVs) and the 10 possible states over a cycle (10*3^5 = 2,430). I certainly don't claim my own version of Golden Jungle Grand is the same as the real thing, but I think will advise pretty well when the game is in a positive state.

As mentioned in the rules, the game counter is for the LAST game played. Usually you will find this on a 10, meaning the last player played off the wild-reel feature and left. That is not what we want to see. Below I give a strategy for when the game counter is at 1, 2, 4, 6, and 8. For games 3, 5, 7, and 9 in the cycle, please look at the strategies for the even numbers bordering it and use your best judgement.

In explaining the strategy I will abbreviate Golden Vishnu as GV.

As you play, it is possible the game will from a positive to negative state, if you don't earn more GV's. You should revaluate whether to keep playing after every spin.

Disclaimer: Please take the following strategy with a tablespoon of salt. This is just a rough guess of what I think a correct strategy should look like. Please also be more picky playing games at casinos with tight slots, like most of them on the Las Vegas Strip. I file this strategy under "something is better than nothing. "

If the previous game was the first game in a cycle, then play with at least one Golden Visnhu on reels 1 to 4.

If the previous game was the second game in a cycle, then play under any of the following conditions:

If the previous game was the fourth game in a cycle, then play under any of the following conditions:

If the previous game was the sixth game in a cycle, then play under any of the following conditions:

If the previous game was the eighth game in a cycle, then play under any of the following conditions:

Discussion about Golden Jungle Grand in my forum at Wizard of Vegas.