Keno is a simple game of luck, much like most lottery games, where the player chooses numbers and hope as many as possible match those randomly drawn by a hopper or machine. The simple form with no multipliers or extra balls is called spot keno. See the Internal Links section below for many keno variants.

Following are the rules for basic "spot keno."

I have several examples of pay tables and their associated return in my page on spot keno.

There are lots of keno variations out there. I have analyzed many of them, as listed below.

We have calculators to determine the payback for any pay table for the following keno games: 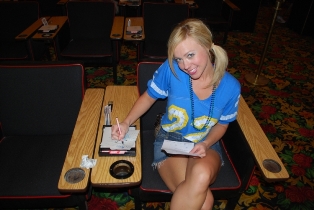 In 2017 I redid my Las Vegas video keno survey, which can be found at Wizard of Vegas.

If you must play keno, the only skill is choosing where to play to play and then how many numbers to choose. It makes no difference which numbers you choose. Contrary to popular myth, legitimate keno games, like those in Las Vegas, are fair and every ball has a 1 in 80 chance of being drawn each game. To determine the odds of any keno game you can use my keno calculator. Just put in the pay table and you will see how much you can expect to get back every bet.

However, I tend to think anybody who would take the trouble to analyze the game is probably not playing it in the first place. The odds in video keno are about as bad as slot machines. If you want to lose a lot less money gambling I would highly recommend converting to video poker. For live keno players, I would suggest converting to bingo.

Get your keno fix right here on my practice game. 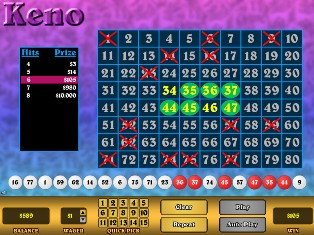 When you're in the casino it would take a long time to put in every pay table through my many calculators above to determine the best game to play. That is why I created two printer-friendly guides you can print out and take with you:

For a printer-friendly document showing keno pay tables and returns for several major keno games please see my Keno Scouting Guide (PDF). Perfect for printing and taking to the casino to find the best game and pay table available.

Keno games by U1 Gaming

Following are keno games by U1 Gaming.

This video shows how to calculate the odds in keno using Excel.