Critter Country is a keno-based game found on multi-game machines made by U1 Gaming. I have seen such machines at the Las Vegas Club, Rampart, and Dotty's casinos in Las Vegas. The thrust of Critter Country is the game randomly chooses an unpicked number to place an egg. If one of the randomly drawn numbers hits the egg, the player can win multipliers, extra balls or a bonus round. 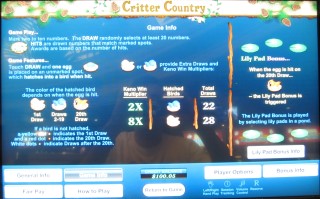 Following are the rules of the Critter Country base game.

The following pay table was seen at the Rampart casino for $2 bets. 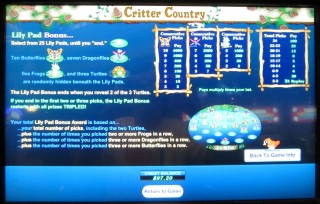 Following are the rules of the Lily Pad bonus.

Finally, there is a bonus game that triggers randomly, outside of the outcome of the keno game. The advertised return of the game is 0.5% higher than my calculations, so I assume this bonus game adds 0.5% to the return.