Triple Diamond Keno is a little known keno-based game that has been around since 1996. It plays like regular keno, except the ball draw may also uncover diamonds. If three diamonds are found, the player wins three times his bet plus three free games with a tripled multiplier.

Currently, the game is rather dated and difficult to find. I would speculate your odds are best on small cathode ray GameMaker machines. The game is similar in theory to Caveman Keno, but the graphics are not as impressive, which is probably why Triple Diamond Keno is fading off into the sunset.

The game I noticed at the Green Valley Ranch had two pay tables, according to the denomination bet. Here are both of them. The return of each pay table is in the bottom row. 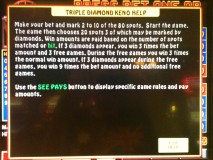 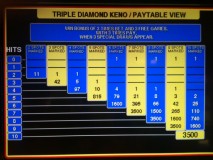 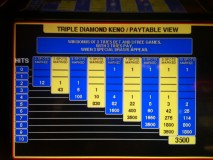