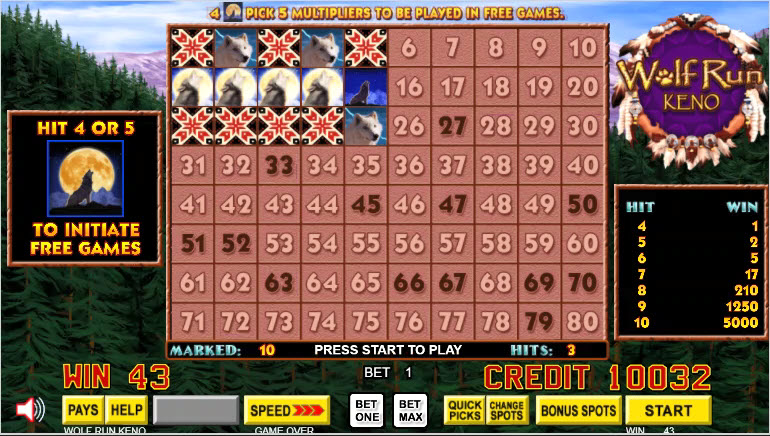 Wolf Run Keno is a keno variant by Action Gaming. The game features a free spin bonus with random multipliers, which can last over many spins.

The following pay table was taken from VideoPoker.com. I would expect most casinos to use stingier pay tables than this one.

The following table shows the count of each possible multiplier according to whether four or five Bonus Spots were hit.

The following bonus example is based on a bet of one credit in the initiating spin.

In the image above, I chose the numbers 11 to 15 as my Bonus Spots. The game draw hit four of them, as evidenced by being marked with a wolf howling at the full moon.

In the image above I'm presented with 11 icons and directed to pick five of them.

The image above shows the second free game. Only two Marked Spots were hit, which didn't win anything. Unfortunately, the Multiplier Shield was hit on number 72. It is hard to tell, but the background behind the shield is dark purple, indicating it was hit. That caused the game to advance to the second of my five multipliers, another 3x, in the next free game.

In the game above, I caught six of my ten Marked Spots, for a base win of 5. At the time, I was using my second 3x multiplier, so my win for that spin was 5×3 = 15. The lower right corner shows a win of 18, because I won 3 credits on a previous spin.

The image above is from later in the bonus, when I hit five Marked Spots with my final multiplier of 6x, for a win of 2×6 = 12 for that game.

The image above is my final game of the bonus. You can see the Multiplier Shield is on 39 and it was hit, as evidenced by the dark purple background. Only two Marked Spots were hit for a win of zero on that spin.

The image above summarizes my bonus results -- 23 games played and a win of 43 credits.

Let me start with the easy part, the base game. I already stated the VideoPoker.com pay table in the rules section. The following table shows the return for any combination of number of picks and catches.

As you can see, the base game return ranges from 37.0% to 37.2% for all number of picks, except three. I would like to emphasize this is based on the VideoPoker.com pay table, which is probably the most liberal one available. Most casino slot managers will choose a stingier one.

The following table shows the total return to player from both the base table and the bonus feature.

I would like to thank VideoPoker.com for sharing with me the multiplier table, which is not indicated in the game rules.

Discussion about Wolf Run Keno in my forum at WizardOfVegas.com.