Free Bet Blackjack is a blackjack variant by game inventor Geoff Hall. The twist to this one is the player doesn't have to risk his own money when splitting or doubling (most of the time). It is like playing with a generous boyfriend at the table who makes all the supplemental bets for you and lets you keep the winnings. What is the catch? Like in Geoff's other game, Blackjack Switch, if the dealer gets a 22, all bets left standing push.

The game opened for business on June 20, 2012 at the Golden Nugget. I went down for the game's debut and found the table full of people enjoying the game. The strategy is simpler and offers more doubles and splits than conventional blackjack. Gamblers who find the basic strategy of conventional blackjack too complicated to memorize may take relief in the simplicity of Free Bet Blackjack.

The rules have changed since the game launched at the Golden Nugget. It is my understand that the rules below are now the norm. The game is based on standard blackjack, with the following rules:

Strategy depends on whether you are playing a real money bet or a free bet. There is a difference because a push is just as bad as a loss on a Free Bet, thus causing a more aggressive strategy. The following three tables show the strategy for a real money hand, free bet hand, and pairs respectively.

If you remember just one thing about the strategy, accept every free double and free split opportunity.

The house edge under the standard rules above is 1.04%.

Following are the effects of some possible rule variants. The effects are the change in the player's expected return. The figures below with a (SH) were taken with permission from Discount Gambling. The ones with a (Wiz) were calculated by me. It is interesting that the greater the number of decks, the better the odds for the player, which is the opposite of conventional blackjack. I assume it is because there is more free-splitting with more decks, due to a lesser effect of non-replacement. 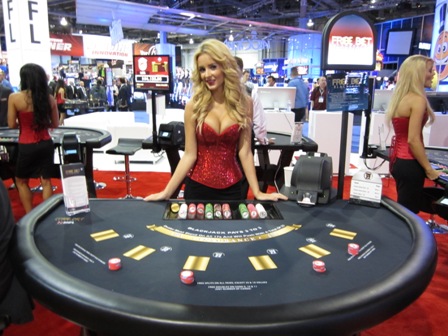 I have heard reports that some casinos offer a side bet called Pot of Gold, which is based on the number of Free Bet tokens the player accumulates per initial hand. The Washington Gambling Commission lists two Pot of Gold pay tables. Following is my analysis of both of them. These tables were based on a random simulation. The lower right cells show a house edge of 5.77% on pay table 1 and 4.64% on pay table 2.

I would like to thank Geoff Hall, the inventor, for his cooperation with the rules and sharing the math report. This report is based on a combination of work between Stephen How and me. We are in close agreement on the house edge. The basic strategy and some of the effects of rule variations are the work of Stephen How.