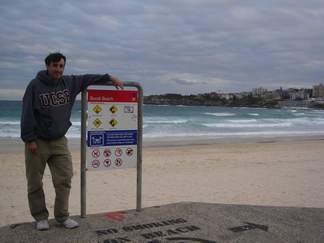 Australian blackjack is played much the same way as in the rest of the world. As in Europe and Asia, the dealer does not take a hole card in Australia. If the player doubles and/or splits, and the dealer gets a blackjack, then what happens next in Australia depends on the particular casino. There are four for possibilities for this hole-card rule, as follows:

OBO (Dealer takes original bets only): Under this rule, the dealer will take the player's original bet only, regardless of what the player did. The player may split and/or double under this rule, without fear of losing more than the initial bet. Mathematically speaking, this is equivalent to the American rule where the dealer peeks for blackjack. My main blackjack page is based on the U.S. rules.

ENHC (European No Hole Card): Under this rule, the dealer will take the total amount the player bet, including doubles and splits, if the dealer gets a blackjack. My European strategy page shows how to play under this rule.

BB+1 (Busted Bets Plus One): Under this rule, the dealer will take all busted bets, plus one more unit from everything else the player may have bet from doubling and/or splitting.

OBBO (Original and Busted Bets Only): Under this rule, the dealer will take any busted bets, and one unit from each un-busted hand on the table. In other words, the player is at risk to lose his additional bets from splitting, but not doubling.

The blackjack rules consistent across Australia are as follows:

Rules that can vary are as follows:

In August 2008 I visited the Star City in Sydney. The variable rules there are as follows:

The following table shows the effect of various rule changes on the player's expected return, relative to the Star City Sydney rules. Changing two or more rules at the same time may cause an interaction effect.

Following is the basic strategy for the BB+1 rule, and the dealer standing on a soft 17.

After splitting 8s against a 10, the player should stand on 15 or more. The only exception is the last hand to be played, where all previous hands busted.

The following table is appropriate for the OBBO rule, and the dealer stands on a soft 17. There are only two changes relative to the BB+1 strategy above: hit 8,8 vs. 10, and hit A,A vs. A.

At the time I visited Australia, in August 2008, every casino in the country stood on soft 17. However, the Crown Casino in Melbourne has since changed their rules to hit on a soft 17, according to this article at the theage.com.au. This increases the house edge by 0.22%.

I would like to express my thanks and gratitude to "MGP" for his Blackjack Combinatorial Analyzer. Usually I use my own programs for blackjack analysis; however they do not support the Australian BB+1 and OBBO rules. The use of MGP's program saved me a great deal of time.