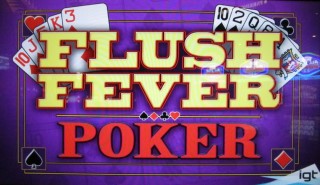 Imagine video poker where every time you drew to a four to a flush you won something. Imagine no more, as this the idea behind Flush Fever. The way it works is that when the player draws to any four suited cards the game will keep burning any replacement cards that don't result in a win until a win is found.

There is another game I encountered in Oregon years ago called Flush Fever with a different concept of a free game bonus round after any flush on the draw. To distinguish between the two games, I shall call the free game version the Oregon variant and the game addressed here the Nevada variant. To make matters even more confusing, I hear there is yet another Flush Fever variant in South Dakota, but I don't know anything about it. 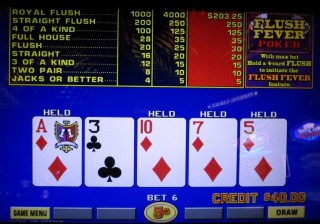 In the hand above I was dealt four to a flush. I held the four diamonds and discarded the three of clubs. 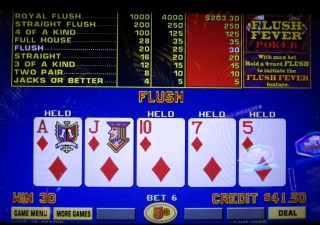 The picture doesn't show it, but a losing card flashed through the position of the second card from the left before the game stopped on the jack of diamonds, awarding me a flush. This burned card is evident in the fact that the meter is 5¢ higher in the second picture, by one coin, because of the single burned card.

The following tables show the probability and return of each hand for the games and pay tables Flush Fever is available in. These tables are based on a maximum six-coin bet. Wins are shown on a per coin basis. The win for a royal is based on the reseed amount. The return column is the product of the win, probability and 5/6. The reason for multiplying by 5/6 is the player must bet six coins but wins are based on five coins only. The overall return is found in the lower right corner.

The following tables summarize my analysis of each game. The column headings are defined as follows:

I would like to thank IGT, the game maker, for supplying the available games, pay tables, and returns that Flush Fever is available in.