Flush Fever is a video poker game I noticed at Figaro's pizza restaurant in Philomath, Oregon, on June 21, 2011. It was on an IGT Game King machine titled "Video Lottery" at the top. Although the game is run by the Oregon Lottery, the cards are dealt as fairly and as randomly as they are in Nevada, per Oregon gaming regulations. In particular, Regulation 177-200-0070.

Later I would find another game in Las Vegas called Flush Fever, but with a different concept. To distinguish the two, I shall call this the Oregon variant and the other the Nevada variant.

The game has the following pay table. Due to a $600 maximum win, the return goes down after six coins. The player may bet up to eight coins but is not rewarded on the royal for the 7th or 8th coin bet.

In addition, there are the following bonus rules. 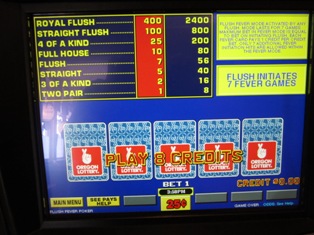 The following table shows the expected return of initial spins. This table does not implicitly count the value of earned bonuses, but the probabilities of each hand reflect the fact that a flush, straight flush, and royal flush are worth about an extra 12 credits due to Fever Spins. The lower right cell shows a return of 63.70% from non-bonus wins. 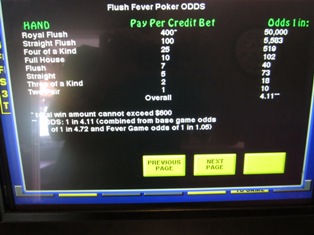 The next table shows the expected return of Fever Spins. This table does not implicitly count the value of additional Fever Spins earned in Fever Spins, nor Fever Suit wins. The lower right cell shows a return of 46.84% from non-bonus wins.

There is a lot that goes into calculating the value of a Flush Fever bonus. Here is my train of thought.


The next table combines both initial spins and Fever Spins to get an overall return of the game. The lower right cell shows a return of 95.70%.

For the advanced reader, who is not satisfied with the 2.075903 average Fever Cards per Fever Spin, the following tables break down the possible outcomes in Fever Spins — poker value crossed by Fever Cards. The next table shows what each outcome in Fever Hands pays, according to the poker value and number of Fever Cards.

The next table shows the number of combinations of each hand crossed by number of cards in the Fever Suit for Fever Hands.

The next table shows the probability of each hand crossed by number of cards in the Fever Suit for Fever Hands.

The next table shows the return from each hand crossed by number of cards in the Fever Suit for Fever Hands. The lower right cell shows that each Fever Suit hand has a return of 2.54 times the initiating bet.

The Oregon Lottery is kind enough to suggest which cards the player should hold in all video poker games. The cards they suggest to keep are already held. If you accept their advice all the player needs to do is keep pressing the deal/draw button, like a slot player. The player may also override the advice if he wishes.

The help screens say that the advice may not be optimal. However, I trust IGT, the maker of the Game King machine, to get the advice feature right. In Fever Spins, 82% of the return is from Fever Cards. Thus, the player can expect the Fever Spin strategy to be mostly trying to accumulate as many Fever Cards as possible.