Ultimate X is a popular video poker variant. The twist is that if the player doubles his bet, then any paying hand not only pays according to the pay table but also awards a multiplier on the following hand. This page addresses the single-line version of Ultimate-X Poker, which can be found on Five Star machines. I have a separate page for the multi-line version.

Following are three consecutive hands I played at VideoPoker.com. Images are used with permission. 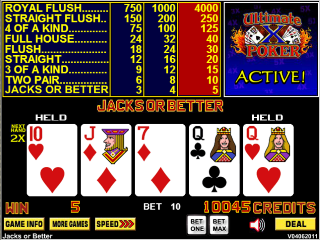 In the hand above, I got a pair of queens, which paid 5 credits and a 2x multiplier on the next hand.

In the third hand, with a big 10x multiplier, I got nothing.

The following table shows the returns for known Ultimate X games and pay tables. As usual, all returns are based on optimal player strategy.

The following table shows my analysis of 8-6 Jacks or Better. The table is in order of the highest total win. The return is the product of the probability, win, and 0.5. The reason for multiplying by 0.5 is the player must bet two units, but the wins are based on a one-unit bet. The lower right cell shows a final return of 98.573%.

Analysis of 8-6 Jacks or Better

The standard deviation of 8-6 Jacks or Better is 5.71, relative to the total amount bet.

The following table shows the probability of each multiplier in 8-6 Jacks or Better under optimal strategy.

For the single-line version of Ultimate X, it is important to have a separate strategy for each multiplier on the current hand. In the multi-line version you can get away with a single strategy, because the multipliers averaged out somewhat across hands, but not in this version.

You can generate strategies yourself for any game and pay table using my video poker strategy maker. To use it, for any given multiplier enter into the "prize" column for each hand: win + multiplier - 1. For example, with a 4x multiplier and a pay table win of 25, enter as the prize 4+25-1=28.

To save you some time, here are some links to the strategies for 8-6 Jacks or Better.

A huge advantage can be had if you find a game abandoned with multipliers! If you see this, play one hand at five coins per line, and then cut and run. Likewise, never leave a game with multipliers on it. Either wait for a losing hand on all lines, or bet five credits per line on your last hand. Don't risk abandoning a game with a multiplier by making a max coin bet with the last of your money. You never want to have to leave a game with a multiplier because you don't have enough money to make another bet.

A big thanks to Gary J. Koehler for sharing with me the returns indicated on this page. My own analysis agreed with the return of the Jacks or Better game.

There is a very realistic Ultimate X game that can be played at VideoPoker.com. A free membership is required.