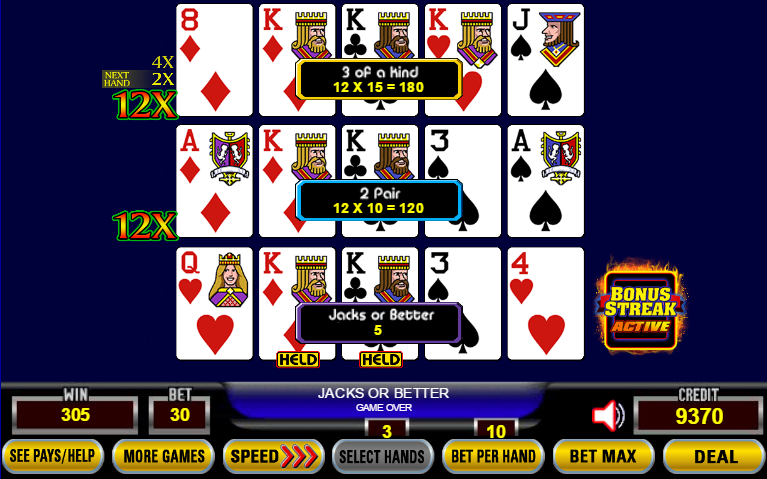 Ultimate X Bonus Streak plays like standard multi-play Ultimate X, except the player wins streaks of multipliers instead of just one for the next hand after certain wins. Read on for the full rules.

If these rules were not clear, screenshots from the rule screens on the game are shown below. Click on any image for a larger version.

The following tables of games, pay tables, bonus streaks, and returns were kindly provided by VideoPoker.com, the creators of the game. The first table is for three-play, the second for five-play, and the third for ten-play. Normally, I like to do my own math but this one was pushing the limits of my mathematical abilities, so I'm grateful to VideoPoker.com for their help. Someday, when I have more free time, I hope to work through this game on my own.

Bonus Poker Deluxe is a bit different, as follows:

For the 10-play version there are only two different streaks per game. For games without wild cards, the streaks are as follows:

For deuces wild based games the streaks are as follows:

Optimal strategy to this game would depend on three things -- the cards you get, the current multipliers, and the string of future multipliers. You would have to take all three of these things under advisement for all 3, 5, or 10 hands, depending on how many you are playing at a time.

It sounds complicated but there is some good news. In 10-play mode the multipliers tend to average out across all ten hands so it doesn't matter much, in terms of strategy, what the current and future multipliers are. It is safe to assume the average is about 2.0. However, you should take under advisement the value of each multiplier stream in playing the current hand. Obviously, the player is incentivized to earn the long multiplier chains. It is quite complicated to calculate the value of each stream.

However, don't worry, as I did it for you. At least with 10-play 8-6 Jacks or better. After a lot of matrix algebra I created a strategy for this game, which can be found at Ultimate X Bonus Streak -- Jacks or Better Strategy.

Here is an uneventful video of me playing Ultimate X Bonus Streak.