Spin Fever is a video poker game I first noticed at the Red Rock casino in Las Vegas in February, 2012. This is the second game I have seen recently to allow for community bonuses in video poker. In other words, a bonus that multiple players can play at the same time. 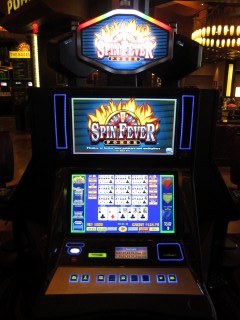 The thrust of the idea of Spin Fever is that every time the player gets a flush or better on the draw, he earns multipliers towards the next bonus. When a bonus is initiated, a prize wheel will spin. If the player chooses to participate in the bonus, then his win will depend on where the wheel stops and the player's accumulated multipliers. After completing a bonus, the player's multipliers will reset to zero. Any player with at least one multiplier may initiate a bonus any time.

Spin Fever may be played like ordinary 3-play, 5-play, or 10-play video poker. To invoke the bonus feature, the player must bet the full five coins per play, and then add an extra 3 coins play as a non-refundable fee . So, the total bet would be 24 coins on 3-play, 40 on 5-play, and 80 on 10-play. All the following rules assume the player is paying the Spin Fever fee.

Whenever the player earns a flush or higher on the draw, he earns multipliers. These multipliers are accumulated until they are used on a Fever Spin. There are three categories of multipliers, as follows:

As long as the player has at least one multiplier, then he may choose to spin the Spin Fever wheel. In addition, if any player at the bank of machines chooses to spin the wheel, then the other players will have about ten seconds to choose to play along. 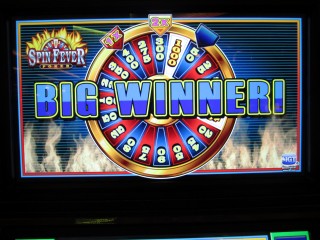 At the Red Rock I initiated the bonus with one flush multiplier and two full house multipliers. The wheel stopped on 400 at the flush arrow, 300 for the full house arrow, and 50 for the four of a kind or higher arrow.

After any Fever Spin the player initiates, or chooses to join, his multipliers will reset to zero.

According to the rule screens the average bonus wins per multiplier for each hand are:

Based on the weighting of each stop (they are not equally likely) I find that the figure above are averages. Here are the average wins to six decimal places.

The following are pay tables seen either at VideoPoker.com or the Red Rock. As usual with video poker, I like to express the pay table in terms of the win per coin, based on a max-coin bet. In this case, the average Spin Fever wins have also been divided by 5. The return column is the product of the total win, probability, and 5/8. The reason for multiplying by 5/8 is that 3/8 of the amount bet is a non-refundable fee.

The following table summarizes the return for each return table above, including the 5-coin return. You can see the return is always higher under the Spin Fever return, for any given game and pay table.

Any Spin Fever game would have a very unusual strategy. If you wish to use my video poker strategy maker, then you should use the 1-coin wins (based on a max-coin bet) plus add 15.92 the flush, 20.76 to the full house, and 27.71 to the four of a kind and higher.

I already ran the strategy for 8-5 Jacks or Better. Here are some of the oddities about this strategy.

If one were to use conventional video poker strategy in Spin Fever, then the cost due to errors would be about 7% of money bet.