The first I heard of 2nd Chance Royal was in 2006, when the inventors approached me and hired to me do a math analysis of the game. At some point after that, they partnered with IGT to market the game. Four years and two months later, it made its debut at the Santa Fe Station in Las Vegas. This should give other game inventors an idea of how long it takes to get a game into a casino, if they are lucky enough to ever get that far. 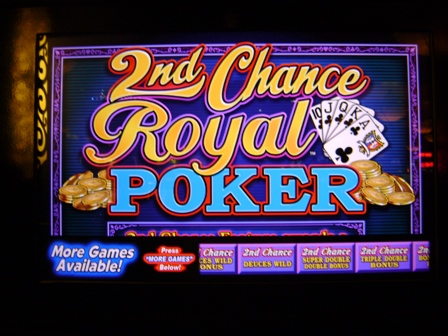 The thrust of 2nd Chance Royal is that if the player makes a max 5-coin bet and has four to a royal after the draw, then he gets a second draw. This is free — no additional bet required. Of course, nothing is truly free in Vegas, so the casino may depress the pay table a bit to pay for this feature. The player will be paid for all wins on both the first and second draw. However, a royal on the second draw pays 200 times the players bet, not the normal 800. 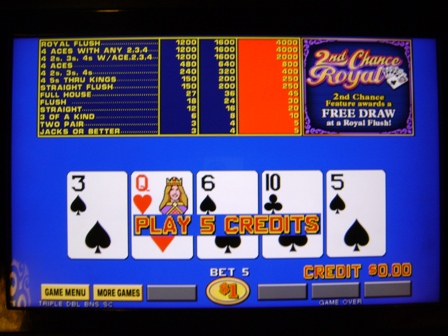 Sorry, you're on your own when it comes to strategy. The 2nd Chance feature is worth about 1.5%, so the player should obviously be more inclined to go for royals than conventional video poker.

I'm happy to report that my 2006 math agreed exactly with that of IGT's mathematicians. The following table was kindly provided by IGT, showing the expected return of all available games and pay tables, assuming optimal strategy. In 2006, I analyzed six of these.