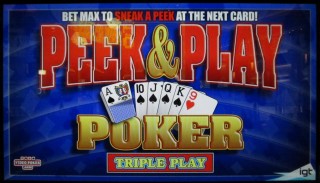 Peek and Play is a video poker variant where the player can see first card to be dealt for the draw before he discards. Of course, nothing in the casino is ever truly free, so the player must pay a non-refundable fee of two-coins per hand, above the normal maximum of five-coins per hand, to enable this feature. If this sounds familiar, it is the same concept as the game Look Ahead Poker, which I already analyzed. 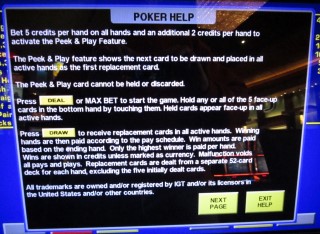 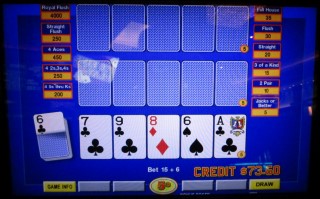 In a normal game of video poker the right play for the hand above would be to go for the outside straight. However, I could see the next card was the six of clubs, which would have caused the straight draw to lose. Instead, I kept the six of spades only, knowing the next card would pair it, and I would have three more cards after it to improve on the low pair. 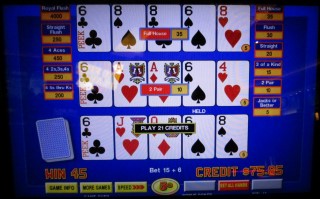 As you can see from the picture above, I improved to a full house on the top hand and a two pair on the middle hand.

IGT kindly provided me a list of all games and pay tables that Look Ahead Poker is available in.

The returns indicated in the following tables are based on a full seven-coin bet.

The following table shows the probability and return for all possible outcomes in 35-9-6 Jacks or Better. It takes my computer three days to run through all possible combinations in this game so please forgive me for having one return table only.

Sorry, you're on your own with that.

Comparison to Super Look Ahead Poker

There is a similar game called Super Look Ahead Poker. The only differences are: