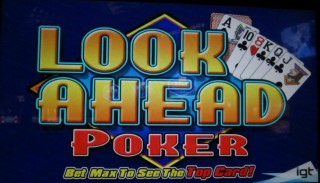 Any legitimate professional gambler, or cheat, can tell you if you know the next card to be dealt, it gives the player a powerful advantage. This is exactly what you're told in Super Look Ahead Poker. After the deal, the game tells you the next card to be dealt. Unfortunately, IGT is not so foolish that they give this information for free. It costs two more coins on top of the usual five, which also pays to bump up the pay table a bit. Below are the complete rules. 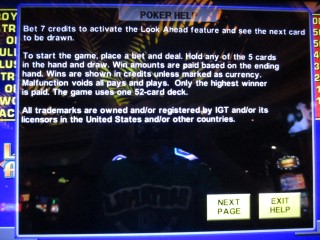 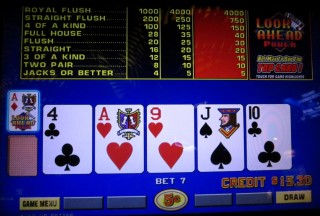 After betting seven coins, here is the hand I was given on the deal. The little ace of diamonds on the left is the next card in the deck. 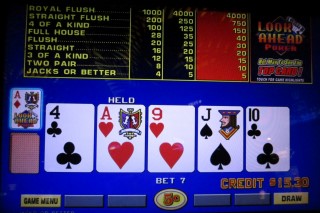 In conventional video poker, the correct play in this situation is to hold the ace and jack. However, knowing the next card is the ace of diamond, I choose to keep the ace of hearts only. 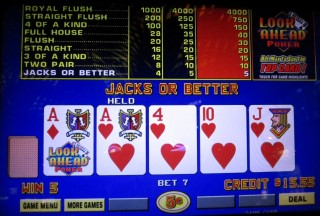 As promised, the game replaced the first discard, the four of clubs with the ace of diamonds. Unfortunately, I didn't improve upon the pair of aces I knew I would get, so was paid for a high pair.

Please note that using my video poker hand analyzer will not give the correct numbers because after the Look Ahead card, you're drawing into a 46-card deck, not 47.

IGT kindly provided me a list of all games and pay tables that Look Ahead Poker is available in.

The returns indicated in the following tables are based on a full seven-coin bet.

It takes my computer three days to run through all the combinations for any given pay table, on a single core, so forgive me for the small number of pay tables analyzed for this game. As always, these tables assume optimal player strategy.

In these tables, the return is the product of the win, probability, and 5/7. The reason for multiplying by 5/7 is that the player must bet seven coins, but the win is only five times as much as the "pay" indicates.

Sorry, you're on your own with that.

Comparison to Super Look Ahead Poker

There is a similar game called Super Look Ahead Poker. The only differences are: