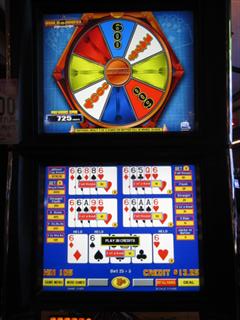 Build a Wheel is a video poker variation I first saw at the Red Rock and Palace Station casinos in December 2011. Like Wheel Poker, the player is eligible to spin a prize wheel occasionally if he makes an additional bet. Unlike other such prize wheel games, though, in Build a Wheel the player fills in the slices himself whenever he gets a dealt three of a kind or better. When the wheel is full, the player gets to spin it. 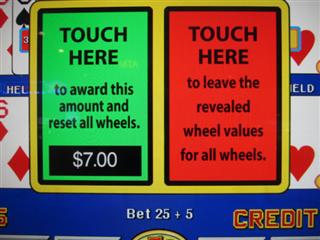 The following table shows the average wins for a three of a kind to flush on the deal. The lower-right cell shows an average slice value of 753.45 for one of these hands.

Three of a Kind to Flush Slice Values

The following table shows the average wins for a full house or higher on the deal. The lower-right cell shows an average slice value of 1143.19 for one of these hands on the deal.

Recall that if the player gets a full house or higher he automatically fills in the entire remaining wheel. Let's call the flush or lower wins a "Small Slice" and a full house or larger a "Large Slice." I won't get into the math, so take it on faith that the average number of large slices on a completed wheel is 1.125245, while there are 4.874755 small slices. The following table shows that assuming the player doesn't win either jackpot, his average bonus win will be 826.55 credits.

However, there is an unknown chance the player will win one of the jackpot slices. All IGT would tell me is that overall the average wheel win is just under 900 credits.

I played the 25¢ 9-6 Double Bonus game (96.38% return) at the Suncoast until I reached a spin. After each slice earned I recorded the amount of the slice and surrender option. Here is what happened. All figures are in credits.

The purpose of recording information was to determine how generous the surrender options were. However, this brings up the issue of what the offer should be compared against. At first I assumed the player would play until he reached the wheel or took the surrender option, and then walked away. I assumed such a player would want to minimize his expected total loss. In doing so, the house edge of continued play would be considered as a cost to reach the bonus. I call this type "player 1."

The following table shows the expected bonus at each stage, the cost to reach that bonus (in terms of both the extra bet and house edge on the other three hands), the equity (expected bonus less cost to reach it), and the surrender offer for player 1. All figures are in coins. This is based on a jackpot of 10,627 coins at the time. I assume the probability of the big jackpot is the same as the 4,000-coin jackpot, of 1 in 168.1 for both.

Player 1 should accept the first two surrender options and reject the last three.

If Build a Wheel has a return of over 100%, perhaps getting there with slot club points, then player 1 should never surrender. However, most of the time that isn't going to be the case. For recreational gamblers, who are playing against the odds for entertainment reasons, I think a better way to evaluate the surrender option is to assume the player will play a very large number of hands. So, if he plays the bonus or surrenders he will keep on playing. Let's call this person player 2.

In calculating wheel equity player 2 does not consider the house edge until the next spin, because he would keep playing either way. Here are how the same surrender offers would look to such a player.

Player 2 should reject every surrender offer, which range from 80% to 66% of equity.

To make a long story short, whether you are playing because you have an advantage, or just enjoy the game, then you should never surrender.