Atomic Fever is a video poker variant I noticed in a Las Vegas bar in March, 2014. It plays like regular video poker, except it includes a bonus feature. For the price of a sixth coin, the player qualifies for the chance to win a free game bonus. Earning the bonus entails charging (or highlighting) four atoms.


Rules screens. Click on any image for a larger version. 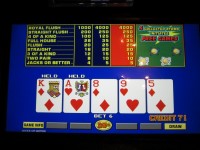 In the photo above, I had two out four charged atoms after the deal. 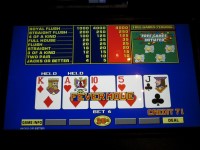 I didn't improve my poker hand on the draw, but did get two more charged atoms, which entitled me to the bonus.

The following table shows the probability of charging all four atoms and earning the bonus. An explanation of the column headings follows the table.


The lower right cell shows the probability of playing the bonus is 1.87%.

Whatever the return of the base game is, you're getting 2.4% more on the sixth coin bet. Thus, the player should always bet the full six coins.

The cards should be played according to the optimal strategy for the base game and pay table.

The following table shows the games and pay tables that Atomic Fever is available in and the return based on a full six-coin bet and optimal strategy.

In general, the return for Atomic Fever will be 1.004768 times the return of the base game. However, to make it easier, a simple rule of thumb would be to add 0.47%.