In November, 2021, a reader sent me evidence of a video poker game where he was sometimes getting back the same card on the draw that he discarded after the deal. I can't call this cheating, because the rule screen did say, "When you click 'deal,' cards with 'held' will remain in play with the others shuffled back into the deck." The game was developed by Pure RNG Gaming. This page analyzes the odds of said game.

The following are the rules, as found as Internet casinos using this game.

The following table shows what each hand pays. Wins are on a "for one" basis. 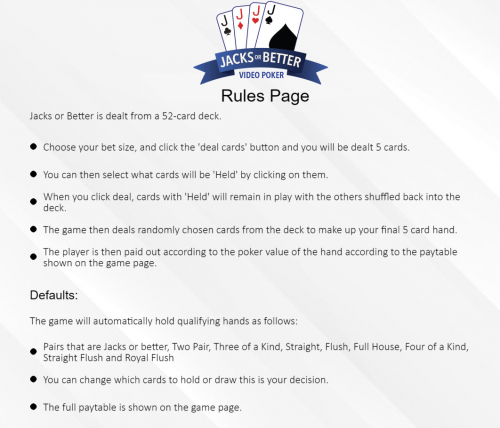 The following table shows the probability and contribution to the return for all possible events, assuming optimal player strategy for this game. The lower right cell shows an expected return of 96.60%.

The following table shows the probability and contribution to the return for all possible events, assuming the player played optimal strategy for conventional 9/6 jacks or poker, without replacement. The lower right cell shows an expected return of 96.59%.

Comparison to Video Poker without Replacement

The following table shows the probability and contribution to the return for conventional jacks or better video poker with the same pay table where discards are not replaced in the deck. The lower right cell shows an expected return of 99.54%.

The cost of replacing the discards back in the deck, assuming optimal strategy for each game, is 2.948%. If the player did not use optimal strategy in the replacement game, but used the proper strategy without replacement, there would be an additional cost of errors of 0.003%, bringing the total cost to 2.951%.

As explained above, conventional 9/6 Jacks or Better strategy can be used at a cost of error of only 0.003%.

Video poker came to casinos in 1989, known then as "draw poker." For 32 years now, the game has been dealt the same way, discarding the discards and dealing replacement cards from the 47 cards left in the deck. Players are used to this rule. Few players need to review the rules page of the game, because the rules are so widely understood.

As shown above, the rule to put the discards back in the deck costs the player 2.95%. If it were not for the fact that this rule is disclosed, I would say it is cheating. However, the rule is disclosed in the rules screen. All I can do is give my readers a firm warning about it. If any player felt such play were unethical, I would have no compunction to not patronize PureRNG ( the software company that made it) nor any casino that offers the game.