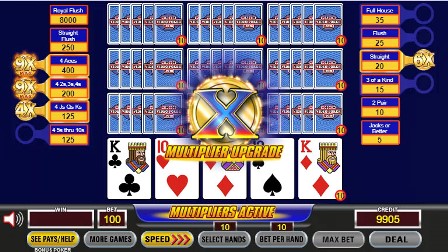 Ultimate X Gold is a video poker variant by Action Gaming. It is based on multi-play video poker, in particular 3-play, 5-play, or 10-play. If the player bets an extra five coins per hand, above the usual five coin maximum bet, then it will enable a multiplier feature. Unlike conventional Ultimate X, the multipliers apply to all hands, but to specific wins only, and remain until used.

Following is a typical multiplier table. This one is for 5-play Bonus Poker.

If that was confusing, the following screenshot explains how the bonus feature works. 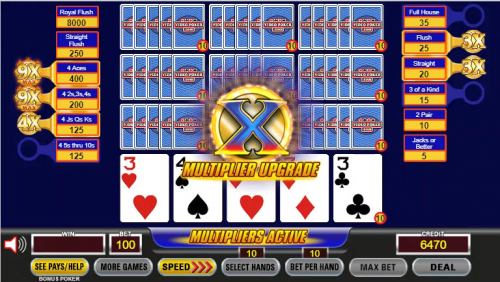 In the screenshot above, I got a full house on the deal, which is more visible in the next screenshot. Notice the multipliers at the start of the hand, as follows. 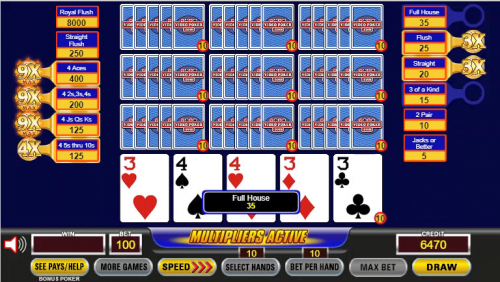 After some animation, two multiplier upgrades are given, as follows: 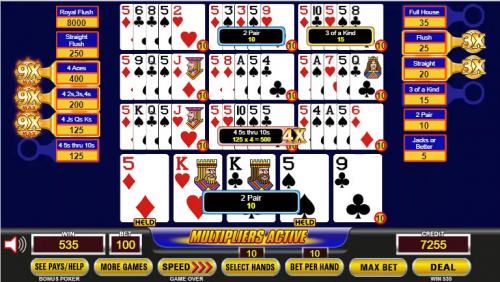 In another hand, shortly after, I received four fives in one of my hands. Four 5's to 10's had a 4x multiplier, earned from the hand in the first image. That increased the win on that hand from 125 to 500. Since the multiplier was used, it dropped back down to 1x after the win was scored.

In this video, I endeavor to explain the rules by example.

To put a good strategy in writing for this game would be very difficult. The right play would depend on the multipliers for every hand, which are constantly going up and down. If you wish to play this game properly, my advice would be to run every non-obvious hand through my video poker hand analyzer, putting in the post-multiplier wins for every hand in the pay table. This would be a very time consuming way to play.

However, I can say that the average multiplier will be about 2.9 in this game. Here is a strategy based on 8-6 Jacks or Better, where the wins for a four of a kind to three of a kind were multiplied by 3. This would be a good starting point, especially for holding 0 to 2 cards. However, for plays that are in easy reach of certain wins, like four to a flush, I would consider the multiplier of the hands in easy reach.

I have not studied a vulturing strategy is much depth. However, remember that the average multiplier will be 2.9 to just equal the return without the feature enabled. Almost half the value of the multiplier feature is in the three of a kinds. After doing some rough math with my video poker analyzer, I offer the following vultering advice:

I would like to emphasize this vulteruring strategy is rough and errs on the side of being conservative.

My friends at VideoPoker.com were kind enough to share with me the returns for Ultimate X Gold. As usual, returns are based on optimal player strategy. The following table shows the return for three-play. The pay table column shows the pay table for making a max bet. Sometimes it is less for betting 1 to 5 coins per hand. In some cases, the same game and pay table can have different multiplier tables. In these cases, I use the multiplier column to specify at least one of the differences.

The following table shows the returns for the games and pay tables for Ultimate X Gold in five-play mode. Please see the Three-Play section for more details on the column headings.

The following table shows the returns for the games and pay tables for Ultimate X Gold in ten-play mode. Please see the Three-Play section for more details on the column headings.