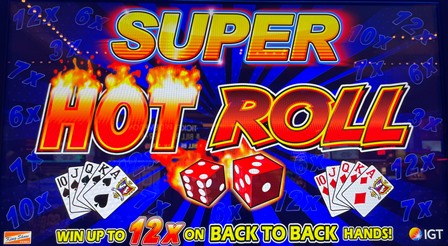 I first noticed Super Hot Roll at the Red Rock casino in Las Vegas on May 3, 2021. It is a variation of the game Hot Roll, adding a feature where multipliers apply to both the current game and the next one.

If my explanation of the rules was unclear, here are the help screens from the game. Click on any image for a larger version.

In the image above, I was dealt four to a flush.

I held the four spades. After clicking draw, the lower hand was awarded a multiplier. The dice were rolled for a total of 11. This gave me a multiplier of 11 for the bottom hand only for the current hand and the next one.

The image above scored the current hand. Unfortunately, all three hands lost. Had the bottom hand won anything, the win would have been multiplied by 11.

The image above shows the next hand. The bottom hand is shown to have a multiplier of 11, earned the previous hand. I choose to hold the king only.

The image above shows the next hand. I choose to hold the pair of tens. Note the bottom hand has an 8x multiplier, earned the previous hand.

The image above shows the outcome of the draw. Unfortunately, none of the hands improved. My 8x multiplier was wasted.

As mentioned in the rules, the game mysteriously sometimes awards a multiplier to all three hands and sometimes to one only. It does not disclose the probability either way. Without that information, I can't do a proper analysis.

I will say it is very typical of games with an optional feature to multi-play video poker that enabling the feature results in a slight boost in the expected return.