Super Draw Poker is a video poker variant I noticed at the Red Rock in June, 2008. I've seen it here and there since then. It seems to be more popular in the Reno area than Vegas.

The game plays like conventional video poker, for one to five coins bet. For a sixth coin bet, the wins for a four of a kinds, and sometimes the straight flush, are increased significantly. All other pays remain the same. Games can be played in 3-play, 5-play, and 10-play modes. The following tables show the games available at the Red Rock. The wins are per 1/5 of the win for six coins. Returns are the product of the win, the probability, and 5/6. The reason for multiplying by 5/6, is because the player must bet six coins, but the wins are only divided by 5 (to avoid decimals). 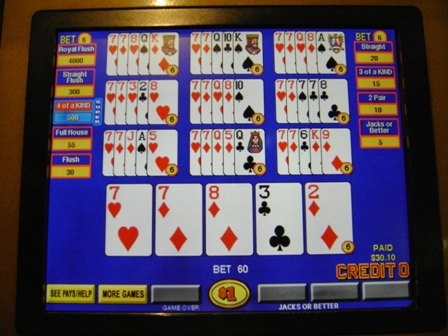