Super Draw 6 Poker is yet another video poker variant by IGT. The humdinger to this one is the player always gets an extra card on the draw. In addition to the standard six-card pays in the pay table, there are some others. The catch? The player must pay a price equal to his original bet to invoke the six-card feature.

In the image below you can see I was dealt three deuces on the deal. 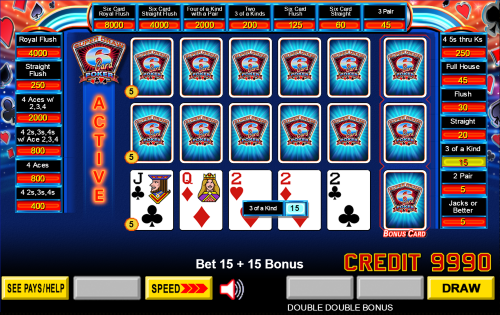 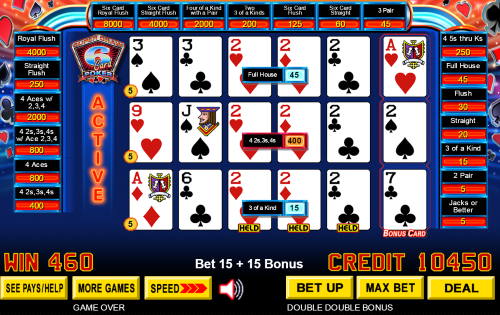 The following tables show my analysis of various return tables. The return column is the product of the win, probability, and 0.5. The reason for dividing by 2 is the player must bet two units and the return shown is based on the total amount bet.

Following is the return table for 9-6 Double Double Bonus. The lower right cell shows a return of 99.32%. The standard deviation of this game is 6.710179.

Following is the return table for 9-7 Triple Double Bonus. The lower right cell shows a return of 99.80%. The standard deviation of this game is 8.665713.

The following tables show all games and pay tables available for Super Draw 6. The column headings reflect the return. Pay tables are expressed as per coin bet, based on a max-coin bet.

I used a brute force looping program to analyze Super Draw 6. To cycle through all 27,906,522,724,080 possible combinations of cards on the deal and draw for any one pay table takes my program about 15 hours.