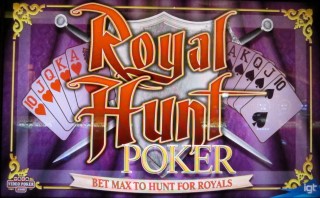 I first saw Royal Hunt at the Suncoast casino in Las Vegas in December 2015. The game plays like conventional Triple Play video poker for up to 15 credits bet. If the player makes a full five-credit bet on all three lines, then he may invoke the Royal Hunt Feature for another 15 credits. In that feature, if the player gets two to four to a royal flush on the deal, then he will get six Bonus hands on the draw.

Rules screens. Click on any image for a larger version. 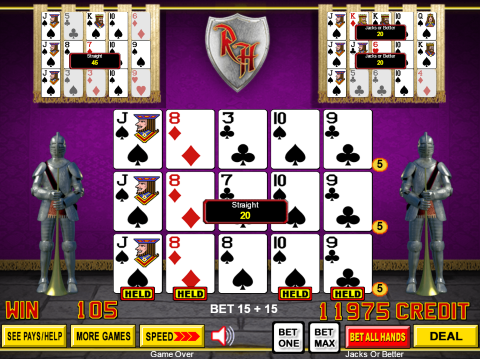 Image used with permission from VideoPoker.com


In the hand above, I was dealt four to a straight, including two to a royal flush in spades. The ten and jack of spades to the royal were automatically propagated to the six Bonus hands.

In the three Triple Play hands, one improved to a straight for a win of 20 credits.

The king of spades was drawn to the top Bonus hand on the right. It was also replicated to the same middle position in the right top hand.

The middle left Bonus hand also improved to a straight. As a Bonus hand, it paid 45 credits. The top two Bonus hands on the right improved to high pairs for a win of 20 credits each. My total win was thus 20+45+20+20 = 105 credits.

This game would be a pretty difficult analysis. Since IGT was kind enough to provide the returns for each available game and pay table, I decided against analyzing the whole game. However, I was curious about the royal frequency so did work that out.

The following table shows the expected royals for each type of hand per initial hand, based on 8-5 Jacks or Better. The bottom right cell shows that the player can get 0.0074456 royals per initial hand. That is once every 1,343 initial hands on average. Conventional Triple Play poker, by comparison, has a royal every 13,390 initial hands, on average.

The following table shows the return for every available game and pay table, assuming optimal player strategy. This information was kindly provided to me by IGT, the game maker.