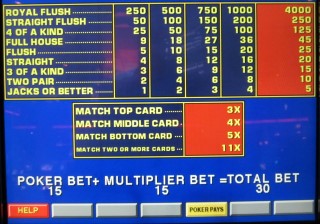 I noticed Triple Play Draw Poker with Match Card at the Peppermill casino in Reno in June 2013. The game plays like triple-play video poker, but with a twist. The twist is after the draw, the game will choose three cards, known as the Match Cards, from a separate deck, not including any cards the player discarded. If the Match Cards match any cards in the player's hand after the draw, then he will win multipliers. The cost is that the player must double his bet, and wins are based on half the total bet only. 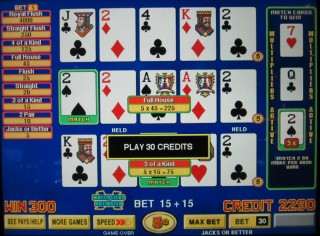 In the example on the right, I was dealt a pair of deuces on the deal, which I held. On the draw, the top hand was garbage, the middle hand improved to a full house, and the bottom one improved to a three of a kind. You can't see the middle card of the bottom hand, so take it on faith that it was the two of spades.

Odds for 9-5 Jacks or Better

As usual for my video poker analysis, I always assume optimal player strategy.

Combinations in 9-5 Jacks or BetterExpand

The following table shows the probability of each hand by number of discards, to six decimal places.

Probabilities in 9-5 Jacks or Better

The next table shows the average multiplier according to number of discards. This illustrates the advantage of discarding more cards.

The next table shows the contribution to the return for each hand and number of discards. Each cell is the product of the probability, base win, average multiplier, and 0.5. The reason for dividing by 2 is the win is based on half the bet only. The lower right cell shows an overall return of 98.592%. This return is 0.004% lower than the 98.596% return published by IGT.

Returns in 9-5 Jacks or Better

The following table shows the probability of discarding 0 to 5 cards in both conventional video poker and Match Card for 9-5 Jacks or Better.

Playing standard 9-5 Jacks or Better in this game, including discarding the singleton with a dealt four of a kind, will result in a return of 0.985946. Compared to optimal Match Card strategy, the cost of errors is 0.000023.

The following table shows the games, pay tables, and returns this Match Card is available in. The table was kindly provided by IGT. As noted before, the IGT return for 9-5 Jacks or Better is 0.000037 higher than my figure. I do not know the cause for this disparity, but am not going to lose any sleep over it.

All Games and Pay Tables