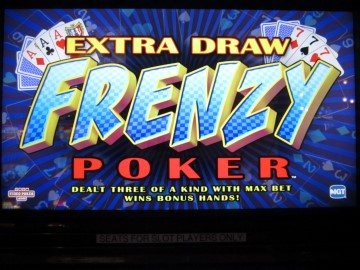 Extra Draw Frenzy is a video poker variant I first noticed at the Fremont casino in Las Vegas on December 7, 2013. The thrust of the game is that if the player gets dealt a three of a kind, then he gets 3 to 7 extra hands on the draw. The game is based on three-play, five-play, and ten-play video poker. The player must bet one extra credit per hand to enable the Extra Draw feature. 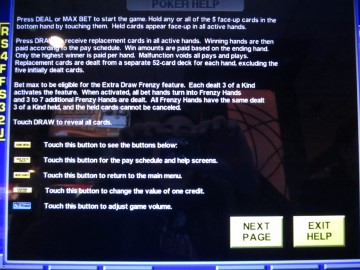 
Note: How the number of extra draw hands is determined, I do not know.

I played triple-play video poker and bet six coins per hand, to enable the feature, for a total bet of 18 credits. After a while I was dealt three sixes. The game then quickly went into the following feature screen. You can see a total of six hands. Three are those I paid for and the other three are Extra Draw hands. 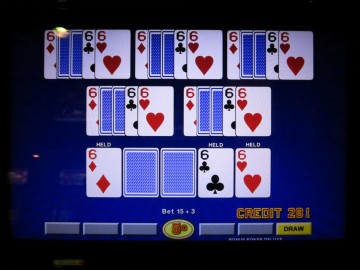 I pressed the draw button and unfortunately none of my three of a kinds improved. 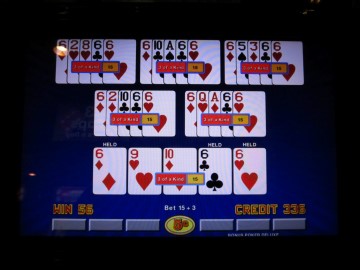 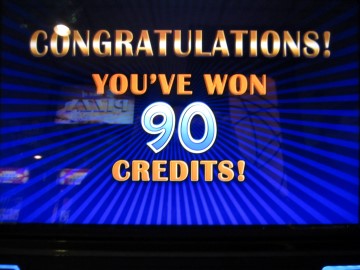 The game then showed just the three hands I paid for. 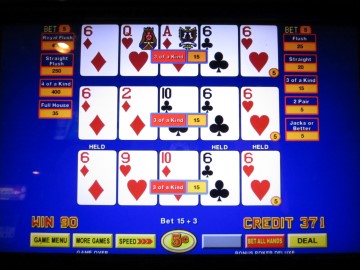 IGT was kind enough to provide me the following table showing the games Extra Draw Frenzy is available on, the pay tables, range of extra hands, average number of extra hands, and return (assuming optimal strategy).

The table from IGT says the return is 99.55%. I would attribute the 0.01% difference to rounding error somewhere, probably on the average multiplier.

I would like to thank IGT for providing me with the return table above.