This page is rather dated and limited in scope. I recommend you visit my page on Teaser Bets in the NFL instead. 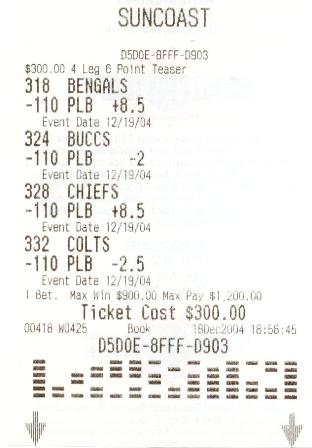 A teaser is similar to a parlay bet in that the player ties multiple wagers together and the cumulative bet wins only if the wagers all win together. Where the teaser differs from the parlay is that the point spread is moved a specified number of points (usually 6 to 7 points) in the player's favor on all picks. The player pays for those points in the form of much lower wins than a parlay bet. For example, a 2-team parlay usually pays 13 to 5, but a 2-team 6-point teaser usually pays 10 to 11. On teasers, each pick is called a "team." I always thought this was confusing, because the player can choose over and under bets too. Personally, I prefer to use the term "pick," but on this page I use the terms "pick" and "team" interchangeably.

As with a parlay, every pick must win in order for the bet to win. In the event one or more events end in a push, then those picks are ignored. For example, if a 4-team teaser results in 3 wins and 1 push, then it would pay as a winning 3-team teaser. In the rare event a teaser is reduced to just one pick, then it usually pushes, because there is no such thing as a one-team teaser. An exception to this is The Greek Internet sports book, which treats any teasers with a losing pick as a loss. Otherwise, don't throw away a teaser bet if the first game loses, because it will still push if every other pick results in a push.

Let's take a look at an example. The image to the side is of a teaser bet I made in 2004. The following would have been the normal point spreads that week:

However, because I did a 6-point teaser, all the point spreads moved six points in my favor, to the following:

If I covered all four of these spreads, then I would have been paid 3 to 1. Since I made that bet, teaser odds have gone down. The Suncoast now pays only 5 to 2 for a 4-team 6-point teaser, for example. The outcome of the teaser above is I won two and lost two, so the bet lost.

Probability of a Single Pick Winning

A good place to start an analysis of teasers is to find the probability of any given pick winning. I looked at every regular season NFL game between the 2000 and 2011 seasons. Then I cut the results by the number of points given, and whether the pick was on a home team, away team, under, or over. The "all sides" column is the average of both sides of all games against the spread.

The most common teasers give the player 6, 6.5, or 7 extra points. However, I've seen teaser cards with an unusual number of points given. To be complete, I analyzed everything from a 0 to 14-point teaser, although many of these you will never see.

The sports book review at my Wizard of Vegas site indicates what all the major sports book families pay on teasers. The next table shows the expected return on 6, 6.5, and 7-point teasers under all known pay tables, for all side and all total teasers.

As you can see, teasing random picks results in a very high house edge most of the time. As a rule of thumb, teasers are a sucker bet. However, with some skill you can get the odds in your favor.

The two most common margins of victory in the NFL, by far, are 3 and 7 points. My sports betting appendix 2 shows the probability of each margin of victory. Briefly, 15.9% of NFL games are decided by exactly 3 points and 9.6% are decided by 7.

In his outstanding book Sharp Sports Betting, Stanford Wong noted that by crossing the 3- and 7-point margins of victory with a 6-point teaser, the player could have an advantage. However, his book is now somewhat dated, and results since its publication have not been good for what are known as "Wong teasers." Let's take a fresh look at them. Again, all the results in this page are based on regular season games from week 1 2000 to week 4 2010.

The table above shows the probability of a Wong teaser winning ranges from 64.58% to 75.69%. I tend to think this is just random variation and that the overall win rate of 72.54% is the significant statistic. The next table shows the expected return of Wong teasers according to the number of teams and the odds a winning bet pays.

The table above shows the classic 2-team teaser that pays 10 to 11 is barely good any longer, with a player advantage of about half a percent. To have an advantage worth bothering with, you need at least three teams and the premium odds. Here is Nevada, when last I checked in 2010, your best chance at a good Wong Teaser is the 4-team teaser that pays 3 to 1 at Leroy's sports books. You can use my Las Vegas sports book groups page to find which cases have a Leroy's outlet.

I have not checked every teaser card out there, but those I have checked I found to be a lousy bet. Consider the Boyd Gaming "Super Teaser" card, for example. For the Monday Night Football game of October 18, 2010, they had the Titans +5 and the Jaguars +12. Ties always win, and every point spread is an even number, so that is the same as Titans +5.5 and Jaguars +12.5. That is mathematically equivalent to a 9-point teaser. The following table shows the pay table, probability of winning, and expected return for a random picker.

The upshot of it is that this Super Teaser card is a lousy bet. You might say, what if the player only crossed through key totals. I found that didn't help much. To make things worse, they give the player only 8.5 points on totals, when they should offer more points than for sides, to be fair.

Most sports books don't allow teasers on pre-season games. However, if you find one that does, I think Wong teasers would be a strong bet. This is because you find a lot of games with a 1.5 to 2.5 spread, and the games tend to be low scoring, and decided by small margins of victory. I don't have data on pre-season games, so this is anecdotal advice only.
Written by: Michael Shackleford