Without Wheels plays exactly like conventional Jacks or Better video poker, except A-2-3-4-5 (known as the "wheel") does not count as a straight. The game can be found at Internet casinos using Soft Magic Dice software. These Internet casinos that have the game don't call it "Without Wheels," but rather by the following titles:

Going by the online rules, these games would all seem to be conventional Jacks or Better video poker. The rule that aces cannot be scored as low is not stated, nor denied, in the rules. To distinguish this game from normal video poker, I created the name Without Wheels since the A-2-3-4-5 straight is known by the poker term, "the wheel." 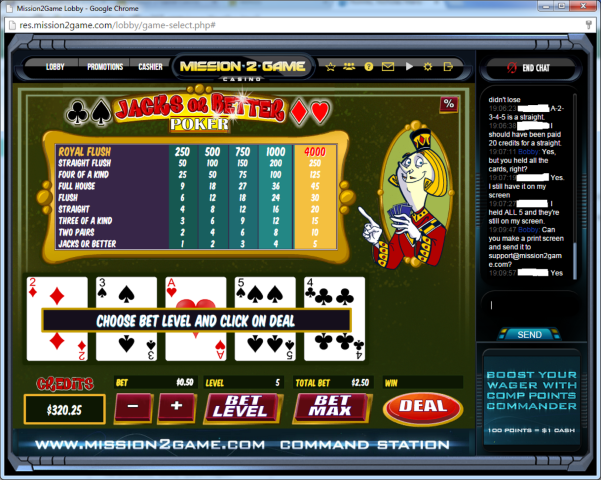 As mentioned in the introduction, the rules are the same as conventional video poker, except there is no such thing as an A-2-3-4-5 straight. In other words, aces are high only. Here is a screenshot showing such a straight that paid nothing.

To provide further evidence of this very unorthodox rule, I quote from an email a disgruntled player received after complaining about not being paid for the straight in the screenshot above. If you're confused by their reply, I think Laura was confused between what constitutes a straight versus a flush.

"Thank you for choosing to play in our casino.

Regarding your request, I must inform you that our rules state that the ace is not considered to substitute one, within a flush. We understand your frustration and in the future we will look to see if we should change something within the rules.

Have a great day! 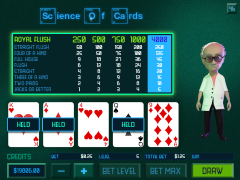 The following table shows the probability and contribution to the return for every possible outcome in Without Wheels, based on a 9-6 pay table. The lower right cell shows a return of 99.25%.

Without Wheels — 9-6 Jacks or Better

Just out of common sense, I would not hold three to a straight flush, ace low. Just keep the ace if there is no better play.