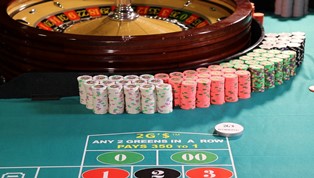 2G'$ is a simple roulette side bet that began a run at the Gold Coast on October 9, 2020. It is played on double-zero roulette only. The bet pays 350 to 1 if the ball lands in either green number (zero or double-zero) twice in a row after the bet is made.

It should be emphasized the 2.77% house edge is lower than every other bet in double-zero roulette. If the player tried to accomplish the same thing by betting on the 0-00 combination, which pays 17 to 1, and let all winnings ride one more bet, then he would win 323 to 1.

Gaming literature from the owner of 2G'$ mentions other pays are available from 270 to 350, by tens. The following table shows the house edge of each.

As mentioned above, the player can achieve a win of 323 to 1 by parlaying after a first win. Thus, I would recommend doing that if a win pays 320 or less.

The literature says the casino many choose from a win of 1050 to 1350 to 1, by 25's. The following table shows the house edge of each available pay.

By parlaying a first win on zero himself, the player can achieve a win for two consecutive zeros of 1,296 to 1. Thus, I would do that rather than accept a win of 1,275 or less.

Players should also be mindful that by law the casino will issue a W2-G form for a table game win, not counting the return of the original wager, that is both (1) $600 or more and (2) 300 or more times the amount bet.