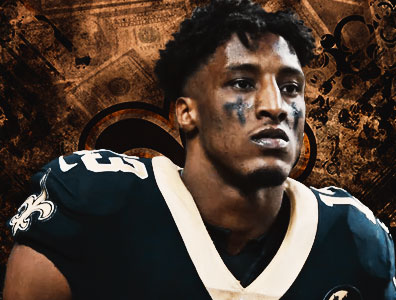 The New Orleans Saints showed how much they value their superstar number one receiver. On Wednesday, July 31st, 2019 Michael Thomas and the New Orleans Saints have agreed to a five year $100 million contract extension. This transaction includes a $20 million signing bonus and $61 million of the agreement is guaranteed money to sweeten the deal.

This new contract extension enables New Orleans to retain the remarkable services of Michael Thomas for the next six years as he will lace up his cleats for the Saints through the 2024 – 2025 NFL season. Thomas is now the highest paid wide receiver in the National Football League. His average salary has increased to $20 million per year.

The New Orleans Saints made a wise decision by selecting the former Ohio State Buckeye with the 47th overall pick (2nd round) in the 2016 NFL draft. The now 26 year old explosive and highly talented wide out has only played 3 NFL seasons, and he has cemented himself as one of the most productive and efficient receivers in the game of football at the moment. Thomas has made a strong case that he may actually be the best pass catcher in the NFL and it is obvious when analyzing his production numbers.

Thomas has pulled in 321 receptions for a total of 3,787 receiving yards to go along with his 23 touchdowns over the previous 3 years playing in the National Football League with authority. The 2018 – 2019 NFL season was easily his best year of work thus far. He led the league in completions last year with 125 of them.

This helped earn him First Team All Pro honors in 2018 where he was selected to his second Pro Bowl (2017, 2018) as well. His efficiency was demonstrated through his unbelievable 85% completion percentage which is by far the most by any wide receiver. No other wide out targeted 100 times or more in 2018 has caught over 74% of the passes thrown their way. Thomas was targeted by his elite superstar quarterback, Drew Brees, 147 times during the Saints previous campaign.

Super Bowl Odds According to Bovada: